The 31 year-old funnyman poked fun at his 'This Is The End' co-star's Instagram mishap, where he attempted to hit on a 17 year-old girl. 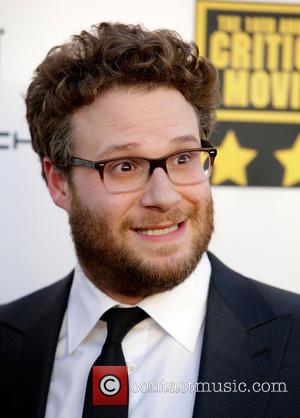 The 31 year-old comedic actor poked fun at his 'Pineapple Express' co-star for trying to hit on a 17 year-old girl last week.

During the opening skit, Rogen told the audience that in order to remember everything for his 'SNL' hosting gig, he wrote down this past week in a diary.

While reading an extract from the book Rogen said, "On Wedneday I decided to prank James Franco."

"I posed as a girl on Instagram, told him I was way young he seemed unfazed," he continued. "I have a date to meet him at the Ace Hotel."

Later on in the episode Franco joined the 'Green Hornet' actor, who didn't seem to appreciate being interrupted, on stage.

"Great prank buddy," Franco said. "I have been waiting at the Ace Hotel for like three days."

The incident occurred when Franco met Lucy Clode, a Scottish teen who was on vacation in New York City, outside the theatre where he is starring in Broadway's 'Of Mice and Men' on March 31st.

When the young fan asked for a picture, Franco obliged and told her to tag him on Instagram. When Lucy did, the pair began talking to one another on the social media site and Franco asked for her number, where she was staying and if they could meet up once she turned 18. The teen then took screen shots of their Instagram and iPhone conversation which soon went viral.

The '123 Hours' actor later tried to that his actions were just down to "bad judgement."

"Unfortunately, in my position - I mean, I have a very good life, but not only do I have to the embarrassing kind of rituals of meeting someone, but if I do that, then it gets published for the world," he said. "So now, it's double embarrassing."