Shania Twain Falls But Is Unhurt At Cmt Awards 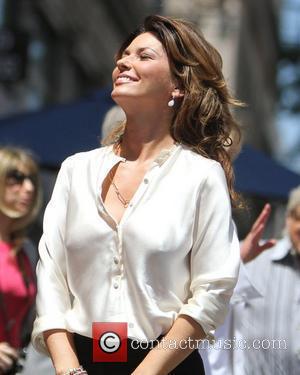 Shania Twain's fall at Wednesday's Cmt Music Awards in Nashville appeared to leave the singer visibly shaken but the 34-year-old has since assured fans she was unhurt, reports Usa Today. After being introduced by Kid Rock, Shania Twain made her way to the stage in the Bridgestone Arena before slipping and hitting the floor.
After quickly recovering, Twain began introducing the nominees for 'Video of the Year' but appeared to be holding her stomach and hips as if in pain. After presenting the award to Blake Shelton, Shania was given a warm round of applause by fans at the sold-out arena before exiting the stage. The singer-songwriter posted a video on her official website shortly after the awards ceremony, assuring fans that she was ok, saying, "I didn't hurt myself. I have a bit of a sore stomach - that's about it". She also laughed about "making a fool" of herself, and claimed she would auction off the heels she was wearing, saying, "I never want to see those shoes again. Or maybe I should keep them as a souvenir?" Twain and Taylor Swift opened this year's Cmt Awards with a pre-recorded 'Thelma & Louise' parody, also starring Chord Overstreet and Donald Trump.
Shania Twain is scheduled to release her first single in six years, 'Today (Is Your Day)' later this month. The singer-songwriter is also reportedly set to return to the studio to complete work on her fifth studio album.