Album review of With A Buzz In Our Ears We Play Endlessly by Sigur Ros reviewed by Matthew Jennings. 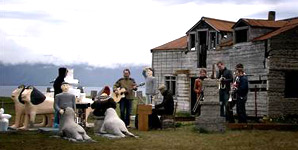 Sigur Ros is a special band. It was partly because of the sweeping beauty of 1999's 'Agaetis Byrjun' that I was tempted out of the high street of rock-music into much more rewarding side-streets and the fields beyond. The melodies, embellished by panoramic arrangements, worked their magic unencumbered by the English language. And their music did, and does, feel magical, partly because of the strange elfin voice decorating the melody, or the restrained glacial (sorry) violence of the bowed guitars present in the band's earlier music.

Like all artists with any serious ambitions of longevity or enduring artistic relevance, Sigur Ros have moved away from the sound which originally defined them, embracing a different stylistic template whilst retaining the ethereal qualities that make them such a unique rock band. After 2002's obliquely titled but heart-tugging '( )', which fitted squarely into the 'slow motion rock' description the band used for itself, 2005's 'Takk' embraces a brighter, bolder, and it has to be said, more commercial sound. And so 'MeÃ° suÃ° Ã­ eyrum viÃ° spilum endalaust' (translated - 'With a buzzing in our ears we play endlessly") follows on in much the same vein. Gone is the cavernous reverb that drenched earlier Sigur Ros. The microphones are closer to the instruments and the whole experience is more direct. Lead single and album opener 'Gobbledigook' is a syncopated acoustic guitar line supported by thudding percussion and sounds like the band enjoying itself. This album follows from last year's live DVD/album, which saw the band playing old and new tracks acoustically. This album is the band taking this vision to the next stage, writing together in a room, playing their wooden instruments and writing songs together. String and horn arrangements, which always played such an essential and central role in Sigur Ros LPs, are used sparingly and only compliment the live band, rather than surpassing it. The second half of the record opens up, slows down, and feels more familiar, with the piano leading with trademark melancholic chord progressions overlaid with twinkling melodic lines. The album's closer 'All Alright' is notable because it is the first Sigur Ros song to feature an English title and lyrics. However, it feels like a totally natural step for the band rather than a conscious move towards commercialism.

I am, if you hadn't guessed it already, a big fan of Sigur Ros and find it fairly unlikely that this band would produce anything I don't like. Having said that and acknowledging that the band is moving forward, some of this album sounds safe and like it was probably fairly easy for the band to write. Which doesn't make it bad, but it does mean that there'll be plenty more cheques arriving from the BBC. If you liked Takk, then you'll like this. If, like me, you found Takk slightly Saccharine in places, you might think the same about this. There are plenty of moments which would suit a wide angle shot of migrating wildebeest or dolphin gracefully sliding in and out of the ocean. Which is fine by me.