The teen sorrow-fest might defeat the long-awaited follow-up at the box office this weekend.

For all the hype around the long-awaited sequel Sin City: A Dame To Kill For, it looks like it might be beaten to the top of the box office charts by the lower-budget If I Stay. Chloe Grace Moretz stars in If I Stay, which does battle with the Sin City sequel this weekend

The tearjerking teen-orientated drama is based on a novel of the same name by Gayle Forman and stars Chloe Grace Moretz as a teenage girl in a coma having an out-of-body experience, having survived a car crash that claimed the lives of her parents and brother.

Continue reading: Could 'If I Stay' Beat 'Sin City 2' To Box-Office Top Spot?

By Jack de Aguilar in Lifestyle / Showbiz on 22 February 2013

Sin City star Josh Brolin is divorcing his wife of eight years, Diane Lane, Sky News report. It is said a representative for the couple confirmed the split.

Sad news, or certainly news anyway; another celebrity marriage is facing the bitter end as Brolin and Lane call it quits. In other news, Brolin and Lane, ironically, sounds like a law firm that caters for the stars. Anyway, here’s a brief background on their eight-year stay in married-land: they tied the knot back in 2004 (any maths wizards might have already worked that out) after each having one previous marriage. They don’t have any kids together, so there’s one awkward court case out of the way, but they both have children from previous relationships. Brolin has an 18-year-old daughter and a 24-year-old son from his marriage to Alice Adair, which ended in 1994. And Lane has a 19-year-old daughter from her marriage with Christopher Lambert, which also ended in 1994. We can just see how the conversation went on their first date. Four years after dramatically calling off his engagement to Minnie Driver, Brolin put a ring on Lane’s finger, and on Independence Day too!

By Steven Williams in Lifestyle / Showbiz on 04 June 2006 Gugino 'In Love' With Racer 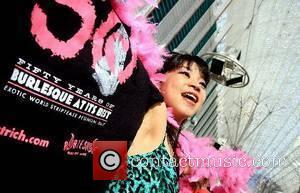