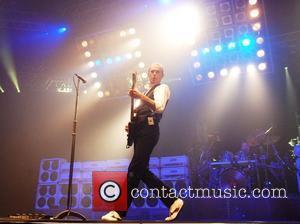 Former Status Quo rocker JEFF RICH has married his girlfriend in Asia in a poignant reminder they survived the 2004 Boxing Day tsunami together. The drummer, who split from the British group in 2000, was holidaying on an island off Thailand with ROBERTA MCDOWELL when the wave hit in December 2004, leaving MCDowell with serious injuries. Rich vowed to wed the 27-year-old after fearing MCDowell had died in the disaster, and the couple have now wed in a Buddhist ceremony on a Phuket beach. He says, "It was a wonderful day. When I saw Rob in her wedding dress I cried tears of joy. "After that wave I thought I'd never see her again. I vowed if I did I'd never let her go again. "It took that tsunami to bring me to my senses. Nearly losing someone so special makes you realise what's important."