Will Stephen Sondheim Bring Fairytale Musical 'Into The Woods' An Oscar?

'Into The Woods' brings together some excellent stories, a stellar cast and a fantastic composer.

Fairytale adaptations are gaining some serious popularity at the moment, while musicals on the big screen continue to be award magnets, put those two together and add an incredible ensemble cast and you have Rob Marshall's 'Into The Woods'.

Meryl Streep plays the wicked witch in 'Into The Woods'

This holiday season brings a rather special twist on the fairytale movie sub-genre, starring the likes of Meryl Streep, Emily Blunt, Johnny Depp and Chris Pine. While it's clear that Hollywood is enjoying bringing Grimm and Perrault's stories to life with such creations as 'Hansel and Gretel: Witch Hunters' and the Emmy nominated series 'Once Upon A Time', 'Into The Woods' goes that step further. With an excellent musical score by the Academy Award winning Stephen Sondheim (composer of 'Sweeney Todd', contributor of 'Dick Tracy' and 'West Side Story' lyricist), we're expecting this movie to join that ever-popular brand of Oscar worthy musical cinema.

More: Which is the best musical movie?

'I think Stephen Sondheim is the greatest living composer we have', says director Rob Marshall. 'It's like the great material matching our great actors; when those two things come together it's just amazing.' In a similar vein, Streep also praised Marshall on his own musical sensibility when it comes to directing, explaining, 'He actually has a percussive sense of the movement of the piece, almost like a conductor.'

Watch the cast & crew discuss 'Into The Woods' in this featurette:


We're excitedly pondering whether or not 'Into The Woods' will have the power to join decades of Oscar winning musicals, such as the ten-time hitter 'West Side Story', 1972's 'Cabaret', 2002's 'Chicago', and even our earliest three-time winner 'Les Miserables' from 2012. We have little doubt with a musician such as Sondheim, and even he's confident about his work. 'It's a large orchestra and it sounds GREAT and when it's in a theatre', he says. 'It's gonna sound pretty lush and spectacular.'

Watch the teaser trailer for 'Into The Woods' here:

Stephen Sondheim - on Anyone Can Whistle: Making the Original Cast Recording Video

Will Stephen Sondheim Bring Fairytale Musical 'Into The Woods' An Oscar? 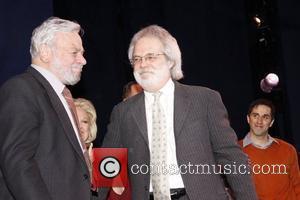