Rock The Kasbah - The Man And The Music Featurette

'Rock The Kasbah' screenwriter Mitch Glazer introduces himself as a reporter for Crawdaddy! magazine (which he ran in the late 1970s) as he prepares to interview Bill Murray in character on the movie's set in Kabul, Afghanistan. Murray hilariously embodies the spirit of the music industry's fictional top manager; an unstable character who finds himself going off the rails despite making some of music's most iconic decisions from Slash's top hat to Madonna's stage moniker.

Continue: Rock The Kasbah - The Man And The Music Featurette

American Idol winner KRIS ALLEN and his wife Katy were involved in a serious car crash on New Year's Day, leaving the singer with a broken wrist. Allen, his family and their dog Zorro were in the car at the time. His mother Kim tweeted, "Kristopher and Katy are both pretty beat up but ALIVE! Thank you Jesus! They are setting his arm now and will have surgery tomorrow. Zorro is fine, too! Very shook up, but not injured."

Allen, who won season eight of the singing contest, was supposed to begin his 'Out Alive' tour this month, though that may be pushed back given his injury. He updated fans on his condition this week, tweeting, "Thank you @Ford for equipping me with a car that kept my whole family @katyallen @Zorropup and the little one we have on the way safe." According to the Hollywood Reporter, he was awarded a Ford car after winning American Idol in May 2009. Shortly after news of the accident broke, hundreds of well-wishers took to Twitter to offer words of encouragement: among them, E Street Band guitarist Steve Van Zandt and his wife. "Stevie and I are sending love and prayers out to Kris and all of you. So thankful it wasn't worse & that he's doing well," Maureen Van Zandt tweeted.

Allen released his second major-label album Thank You Camellia in May 2012. It was met by mostly positive reviews.

David Chase Returns With 'Not Fade Away': Can It Better The Sopranos?

Of course, comparing David Chase's big screen offering 'Not Fade Away' with his magnum opus 'The Sopranos' would be futile, though many will be unable to sit through the saga of mobsters and violence in New Jersey without sparing a thought for James Gandolfini and Tony Soprano; partly because Gandolfini stars in the new movie.

The movie - which premiered at the New York Film Festival this week - is essentially a coming-of-age story set in the early 1960s, when rock music and rebellion became truly intertwined. The plot centers on an aspiring singer-songwriter named Douglas (John Magaro) and his traditionally minded father, played by Gandolfini. The 51-year-old isn't the only Sopranos alumni to join Chase on 'Not Fade Away' - Steve Van Zandt served as music supervisor on the movie and taught the actors to play hits by The Beatles, The Rolling Stones and The Kinks during a three-month musical "boot camp", reports Reuters. Van Zandt, a guitarist in Bruce Springsteen's famed E Street band, played mobster Silvio Dante on HBO's hit television series, which ended five years ago. Speaking at a press briefing in New York, the musician said of the cast, "They're a band now. They could perform at a party tonight.It took me, like, 10 years to learn what they learned in three months."

Early reception to the film has been positive, with The Hollywood Reporter's David Rooney writing, "In his first feature, David Chase returns to the New Jersey suburbs to cast a bittersweet glance back at the rock-fueled restlessness of the Sixties." ScreenCrush's Matt Singer focused his praise on filmmaker Chase, calling him, "the total package: a visual storyteller with a great ear for dialogue." 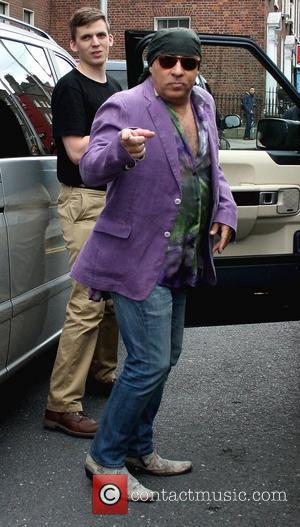