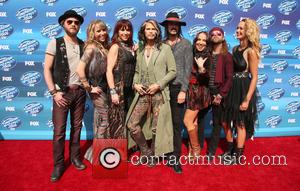 Picture: Steven Tyler and and Loving Mary - A variety of stars were photographed as they arrived for the 2015 American Idol XIV Grand Finale which...

The Aerosmith frontman watched the happy couple exchange vows during a ceremony in Carmel, California, which was also attended by her actress half-sister Liv Tyler, model half-sister Mia Tyler and brother Taj, according to Usmagazine.com.

The couple became engaged in 2014 after two years of dating. Tyler and Foster, the younger brother of 3:10 to Yuma star Ben Foster, formed the electronic soul band Kaneholler in 2013.