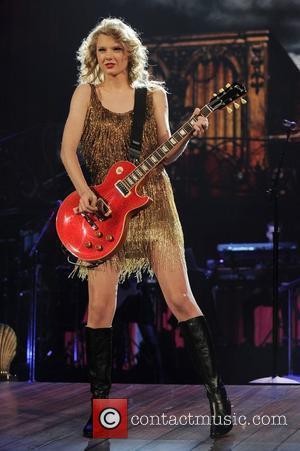 Taylor Swift, the 21-year-old country singer-songwriter, teamed up with Shania Twain to open Wednesday's Cmt Music Awards with a parody of the classic road movie 'Thelma & Louise'. Taylor Swift also walked away with the prestigious 'Video of the Year' award.
Swift and Twain took on the roles of the famous runaways, played by Susan Sarandon and Geena Davis in Ridley Scott's 1991 movie. The comedy skit featured Kid Rock, Chord Overstreet, the comedian Ron White and Donald Trump. The 'Celebrity Apprentice' boss professed, "If I could harness the power of these two women, I could control the world. They're unbelievable!". Swift later picked up the fan-voted' Video of the Year' award for 'Mine' and delivered an acceptance speech via video-link from her show in Wisconsin, saying, "I just want to say thank you and hi to everybody back at the Cmt Music Awards. I wish I could be there, but I'm hanging out with 15,000 of my closest friends in Milwaukee. I want to thank so many people - all the little kids who are in the video and their families for bringing them to Maine and being in the video". The evening's highlight live performance saw Jason Aldean team up with rapper Ludacris for a rendition of his hit track 'Dirt Road Anthem'.
Taylor Swift's single 'Mine' entered the Billboard Hot 100 at number-three following its release in 2010. The track's success made Swift only the second female artist in history of the chart to have multiple tracks debut in the top five during a calendar year.