Revered British Actor Terence Stamp Escaped With His Life On The Set Of His New Film Bitter Harvest After A Horse Lost Its Balance And Fell Directly On Top Of Him. 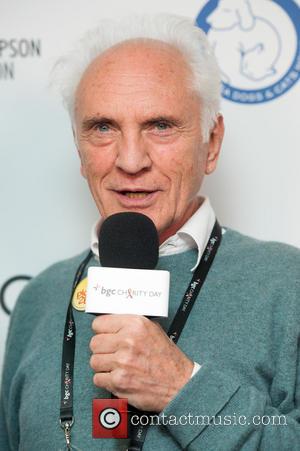 Picture: Terence Stamp - A host of British Celebrities were helping out at the 2014 BGC Fundraising Day on the trading floor at Barclays in London,...

The Superman star, 77, reveals he was wrapping up filming on the George Mendeluk drama in Ukraine when the accident happened, leaving him crushed under the weight of the beast.

He tells Britain's Daily Mail newspaper, "My horse had a habit, when I brought it to a stop, of lifting its front legs up.

"On my last day, I brought it to a stop but slid off the back... I looked up and saw that this horse, which weighed half a ton, had lost its balance and was going to fall directly on me.

"It fell on my chest and pelvis. If it had landed any further up, it would have killed me. It broke my pelvis in six places, two ribs and ripped a tendon in my arm."

Stamp was convinced he would die as the terrifying incident unfolded before his eyes, and the only thing he was worried about was the headlines in the tabloids the next day.

He says, "I always imagined that my last thoughts would be somehow profound, but what went through my mind was, 'Distinguished actor killed by horse's a**e'."

Stamp goes on to admit he declined to take legal action over the near-death accident, quipping, "If I was American I might have taken this further, but I just couldn't be bothered."