Review of The Great Escape Festival in Brighton taking place over 14/15/16 May 09. 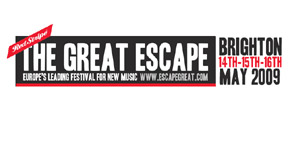 So, we're only halfway through May and already Contact's liver feels like its been shot several times over thanks to the excessive amounts of Smirnoff and Red Stripe we've poured down our throats, all in the name of the good old music festival of course.

The latest in a long line of planned outings this summer happened down the (normally) sunny south coast seaside resort of Brighton last weekend. Over 300 artists covering 36 venues spread over three days we hear. Sounds almost too good to be true we think, and unless you're one of those masochistic types who enjoys standing in queues hours on end, or hopping between locations like an over enthusiastic rabbit on amphetamines, it is.

That's not to say that we didn't have the time of our lives, not only discovering the odd secret party but also one or two as-yet unknown gems along the way.

Thursday 14th May
The sun is shining quite fiercely over Brighton beach, so Contact heads off for an ice cream and a quick saunter down by the sea. There, a little birdie tells us there's a party being thrown by the people from Helter Skelter in the upstairs bar of Audio, and we promptly hotfoot it over to see a fine set by Leeds four-piece CLUB SMITH. You may remember their collective members from previous outfits The Hair and Voltage Union, but where those bands merely promised the goods without ever really delivering, Club Smith's belligerent mix of jerk-punk mayhem and skewered pop could just be their ticket to success.

Talking of tickets, tonight's Fat Cat Records event at Jam would have been a sell-out weeks ago judging by the bodies literally crammed into the tiny downstairs roomed hoping for a peek at WE WERE PROMISED JETPACKS. We poke our heads around the door, hear the pulsating power pop of 'Quiet Little Voices' and dizzy climax of 'Short Bursts' before running for a breath of fresh air. When we return, the room has half cleared, or at least the industry bods appear to have departed, replaced by genuine music fans, which is just as well because THE TWILIGHT SAD are back in town, and singer James Graham makes it abundantly clear on more than one occasion this weekend of his feelings for such people.

Nevertheless, their six-song set is one of the highlights of the weekend, particularly the three new songs aired here ('I Became A Prostitute', 'Seven Years Of Letters', Make To Disappear') that display a more structured approach in terms of verse-chorus-verse than on previous works, although still keeping those raw, uncompromising levels of intensity that have become the band's trademark. When sophomore album 'Forget The Night Ahead' drops in September, expect it to be one of 2009's best.

Next stop is Audio, where the queue is already around the next block, unsurprisingly so as BLACK LIPS chaotic garage-infused punk creates a mini-riot both in and outside of the venue. Less gimmicky than previous shows, tonight's performance is all about the music, maaan, and the likes of 'Girls' don't disappoint, even if the condensation dripping off the ceiling resembles a south Pacific rainstorm.

The last time AMAZING BABY visited these shores they were the witching hour openers for MGMT's sold out autumn tour. This time around, in the homely confines of the Queens Hotel basement, where the setting feels more akin to a wedding reception, they soar like eagles. Mixing atmospheric space rock with juggernaut sized riffs, their repertoire is like watching Anton Newcombe join Black Sabbath for the day and none the less encapsulating. On this form they're a joy to behold, and in the process create a whole genre; Shoeglam.

Afterwards we venture to Coalition for a little dance action with KILLA KELA and FAN DEATH but neither really lives up to expectation, despite the latter's ambitious and oh-so-slightly risqué stage show.

Friday 15th May
The next day I'm awoken by a roommate on a sleepwalking mission, only to find he's destroyed my phone by way of mistaking it for a toilet. Not a good start to the day, and the relentless downpour makes it difficult to concentrate on much other than seeking sanctuary from the rain, even though there's an awesome Levis party at Audio with a MYSTERY JETS DJ set and free burgers and booze galore.

We finally settle on heading for Digital where OX.EAGLE.LION.MAN are playing a genre-transcending and ultimately compelling set that veers between 19th Century baroque pop, experimental progressive rock and thrash metal. The London four-piece have certainly come a long way since the last time we met, and in Frederick Blood-Royale, have a charismatic frontman who may well be pushing a serious claim as Britain's answer to Nick Cave before long.

Next we're back at the Queens Hotel where local five-piece THIS CITY are serving up an impeccable squall of math-directed emo rock that may have its roots over the other side of the Atlantic but is purely homebred in its execution. 'We Move' is like the godson of Q And Not U if they'd been reared on 80s punk rather than obscure college rock while 'Romantic' knocks recent Britrockers like Lostprophets and Bring Me The Horizon for six, in the nicest possible sense of course.

On any other day, This City would have stolen the show quite easily but the fact they're superseded by the almighty dananananaykroyd is nothing to be ashamed of. The Glaswegian six-piece's live set is quite possibly the most accomplished on these shores at this present moment in time, and even though it would be fair to say the majority of those assembled in the room probably couldn't name one of their songs between them, its highly unlikely they'll witness a more exciting thirty minutes at any live music event they choose to attend this year.

As is par the course for a Dananana. show, Calum Gunn and John Baillie Junior spend as much time in the front row as they do onstage, while the customary "Wall Of Hugs" that closes their show is usurped by the numerous holes punched in the low ceiling as audience and band get (literally) carried away by the whole thing. A truly phenomenal ending to Friday's proceedings.

Saturday 16th May
Having stayed up pretty much the whole night veering between various drinking dens, we're kindly informed that there's a Fear & Records bash happening at the Freebutt around midday and Derby's excellent YOU ANIMALS are on first. Paracetamols in one hand and can of Relentless in the other, we're glad we did as their spunky mix of new wave punk and intelligently crafted pop is the perfect hangover cure.

Next it's a ten-minute stagger to Horatio's Bar on Brighton Pier, where some of New Zealand's finest are creating a storm of their own. None more so than the frenetic DIE! DIE! DIE!, whose chaotic discordant noise is just about as cathartic as it can possibly get on a Saturday afternoon by the sea. Fellow countrymen (and women) THE VEILS follow suit and despite protestations about the short allotment for their set, they deliver finely tuned performance which showcases the highlights of recent long player 'Sun Gangs' whilst ensuring those Arcade Fire comparisons remain at the forefront of everyone's thoughts, for a good twenty minutes at least.

With the number of punters seemingly having increased threefold compared to the past two days, the queues become unbearable to the point where getting in almost anywhere becomes an achievement. We head for Digital where TELEPATHE's space-age dance set seems to divide the packed-out room. Unfortunately, we're in the negative half of the split, and even though it may have seemed a good idea at the time, decide that 8pm on a relatively sober Saturday night isn't the best time to see such a show, and promptly head off elsewhere.

Fortunately, iLiKETRAiNS are just about to go onstage at Concorde 2, a venue that is slightly off the beaten track so therefore not over-populated, and we make our way there safe in the knowledge we could be onto something special. As with The Twilight Sad a couple of nights earlier, iLT are a joy to behold, while in new song 'Sea Of Regrets', a sprawling, complex masterpiece that could double up as post-rock's 'Bohemian Rhapsody' they may have just constructed their most exquisite composition to date.

With the queues refusing to subside we head back to the Queens, but sound difficulties render both FLASHGUNS and GOLDEN SILVERS sets fairly inaudible, so a quick stroll to the Fortune Of War proves fruitful as BETTY AND THE WEREWOLVES play an acerbic set of bittersweet C86 punkpop that is equal parts Talulah Gosh, Thee Headcoatees and Sleater Kinney making it utterly wonderful as a result!

Having survived sleepless nights, ridiculously long queues, heavy rain, an avalanche of booze and a urine-saturated phone, Contact has somehow managed to make it to the end of The Great Escape, and although a good night's sleep is definitely at the top of our list of priorities, we'll hopefully do it all over again in 2010!