By Tareck Ghoneim in Music Reviews on 30 November 2010

The Jolly Boys have an incredibly long and endurable history as musicians, having spent the past 60 years performing, they are one of the original sounds of Jamaican 'mento'. Undoubtedly The Jolly Boys are the most recognizable mento band in the world. Mento is certainly a unique and colourful sound that was the forerunner to reggae and ska but even though it may sound older and more accessible it still has that edge that always comes from good Jamaican music. The Jolly Boys have been royally accepted throughout their career but recently Geejam Jon Baker and Wall Of Sound's Mark Jones have collaborated with these masters to create 'Great Expectation'. 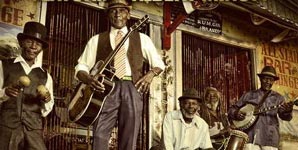