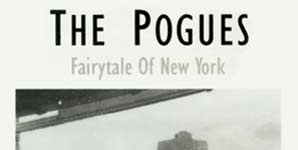 The Pogues re-release their classic Christmas hit 'Fairytale of New York' on Warners on 19th December 2004. The song, featuring the late Kirsty McColl was voted the best Christmas song ever in a poll by TV station VH1 last year, beating Band Aid, Wham and Slade to the top spot.

The band originally formed in 1982 and were called 'Pogue Mahone' (Gaelic for 'kiss my ass'), and the classic line up of Shane McGowan, Philip Chevron, Jem Finer, Darryl Hunt, Spider Stacy, Andrew Ranken, Terry Woods and James Fearnley will be appearing at the December shows. The group played to over 50,000 people last year at some legendary performances across the UK.

The Pogues will be donating proceeds from the record to the homeless charity Crisis At Christmas and the Justice For Kirsty Campaign. Set up by the late singer's mother Jean, the fund has enabled the family to fight the long legal battle for justice following the tragic death of their daughter, killed by a powerboat whilst on holiday with her children. Almost five years on from her untimely death on 18th December 2000, no person has been made accountable to the satisfaction of her family and friends. For further information go to - www.justiceforkirsty.org


The Pogues are also perfoming live in 2005, dates are as follows:

The Pogues, Fairytale of New York,...