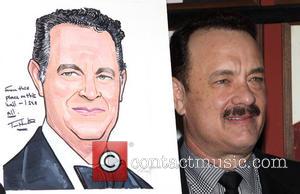 Stars including Tom Hanks and Jesse Tyler Ferguson turned back time this week (beg03Jun13) to celebrate the 1950s at an event in New York.

The evening featured performances and readings by a host of famous faces, who brought to life a selection of television shows, books, poems, and plays from the era as part of Lapham's Quarterly magazine's second annual Decades Ball.

The glitzy event took place at the Capitale venue in Manhattan.