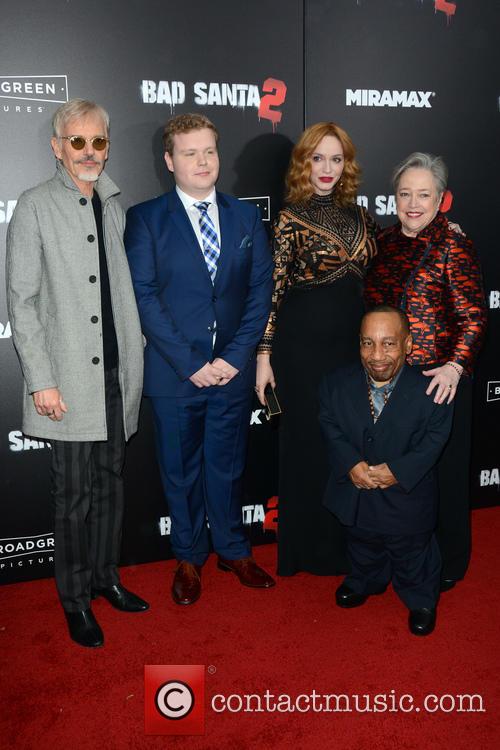 Since we last met Willie T. Stokes, his life has had plenty of ups and downs; but mainly downs. He's still in touch with his curly haired friend, Thurman but he's the only person he really has in his life. Thurman is now fully grown and at the age of 21, he's now old enough to drink and he works at a sub sandwich shop.

Thurman is just as naive as the last time we saw him but he has just as much faith in his buddy Willie as he ever has done. Willie can't help but still feel protective over the boy he helped save from bullies all those years prior.

As for Willie's old partner Marcus, as far as Willie's concerned hopefully he's still rotting in jail after attempting to kill Willie. When Marcus gets in contact with our cranky aging ex-Santa, he's surprised to hear from him and even more surprised to learn of a new con Marcus tells him about which could be worth millions.

Oz The Great And Powerful Review

Like Tim Burton's Alice in Wonderland, this film shows the overpowering strength of Disney and producer Joe Roth, as they once again bury a gifted filmmaker and cast in an effects extravaganza that's strong on visuals but short on story. There are glimpses of Raimi's genius here and there, most notably in his eye-catching use of 3D. And the actors manage to inject a bit of spark into their family-friendly characters. But the plot and the relentlessly simplistic tone will only please children or undemanding adults.

At least it looks amazing. And like the 1939 classic The Wizard of Oz, the film opens in black and white with a Kansas-set prologue, where the womanising conman Oscar (Franco) performs as the flashy magician Oz. Chased into a hot-air balloon by an angry husband, he is engulfed by a tornado and drops into the colourful land of Oz, where people are looking for a messianic wizard named Oz to save them from the witch who murdered their king. But which witch is the wicked one? Oscar first meets the naive Theodora (Kunis), who hasn't yet decided if she'll be evil or not, then her big sister Evanora (Weisz), the steely interim ruler, and then the too-good Glinda (Williams). And even though he's not a real wizard, he might have some tricks up his sleeve that can help.

The film mixes ideas from L Frank Baum's stories with references to the iconic 1939 film, plus much more epic landscapes of Oz recreated with eye-popping digital trickery. On the other hand, the plot is formulaic and predictable, with characters who are only superficially complex and are far too obvious in the way they interact, badly underestimating the sophistication of even very young children in the audience. But the real problem is that the film is focussed on visual spectacle rather than endearing characters. The sidekicks this time are a slightly creepy-looking flying monkey (Braff) and a feisty china doll (King), both rendered with elaborate motion-capture effects that never quite seem to be there on the set with the actors.

Oscar Diggs is a magician in a circus in Kansas who has about as much moral fibre as he has accomplishments to his name; that being none whatsoever. However, all that changes when he is magically transported to the land of Oz after his hot air balloon gets caught in a ferocious storm. He is about to have his ethics and his trickery put to the test after initially seeing the colourful and sparkling new world as a way of gaining the fortune he so longs for. Things change when he meets three beautiful witches Theodora, Evanora and Glinda who doubt his so-called magical powers are genuine but do believe he could still be great and powerful like the rest of Oz believe him to be if he saved the land from the wicked witch and became the righteous man he truly ought to be.

This vibrant Disney adventure has been adapted by director Sam Raimi ('The Evil Dead', the 'Spider-Man' trilogy) and screenwriters Mitchell Kapner ('Romeo Must Die', 'The Whole Ten Yards') and David Lindsay-Abaire ('Robots', 'Inkheart', 'Rise of the Guardians'). It has been based on the 1900 novel 'The Wonderful Wizard of Oz' by L. Frank Baum and serves as the prequel to the 1939 movie 'The Wizard of Oz'. Due for release on March 8th 2013.

Oscar Diggs is an ethically-challenged circus magician who seeks fortune and recognition for his tricks and illusions. One day he and his top hat are sent away from his home of Kansas in a hot air balloon but are subsequently caught up in a destructive storm which takes them to the magical land of Oz. Oscar is in awe of the dazzling place and mysterious creatures and begins to see Oz as the path to prosperity. He soon discovers that this is not so when he meets three beautiful witches Theodora, Evanora and Glinda who rightfully doubt his competence in the field of magic despite the rest of Oz believing him to be the powerful wizard they have all been waiting for. His awe of Oz is soon diminished as he discovers troubles of huge proportions in the land and finds himself struggling to work out who is on the side of good and who is on the side of evil. He uses his expertise in the art of illusion and showmanship to become the great and honourable Wizard of Oz.