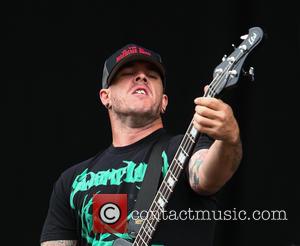 The band had been due to play at Hersheypark Stadium in Hershey but Roth's illness meant that they were unable to perform as doctors told the singer to rest.

A statement on Van Halen's Facebook.com page reads, "Due to David Lee Roth suffering from the flu and the doctor recommending he rest his throat, Van Halen's concert tonight (8/23) at Hersheypark Stadium has been cancelled. Refunds will be available at point of purchase."

The gig was part of the band's summer tour, which is scheduled to continue on Tuesday (25Aug15) in Darien, New York, and will take in 18 further dates before it finishes on 4 October (15) at Los Angeles' Hollywood Bowl.

Bassist Wolfgang Van Halen apologised to fans and expressed his frustration at not being able to play on Sunday, writing on his Facebook page, "This sucks... Dave has the flu and won't be able to perform. The show in Hershey tonight has been canceled. Refunds are available at the point of purchase.

"To all the fans, we are SO sorry. This is such a huge bummer. We were really looking forward to this show... I really wish this wasn't the situation."