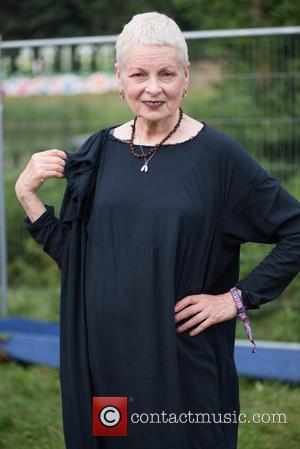 British celebrities including Dame Vivienne Westwood, Paloma Faith and Duffy have snapped a series of 'selfies' in support of the launch of a new website, which enables members of the public to ask politicians about fracking.

The stars have come together for MyFrackingQuestions.org, an online platform which allows U.K. citizens to ask Minister for Energy Matthew Hancock Mp about the controversial gas-extraction method.

In the photos, each celebrity holds up their own question about fracking, with singer Faith asking, "How can you be sure that our health will not be put at risk by fracking? I am concerned about the health risks to the population and the long-term repercussions (of fracking)."

Duffy calls on Hancock to attend a Talk Fracking debate to address the public's concerns, and says, "I would like to call for a National Moratorium. A 'stop the clock’. No more intrusive fracking until we, as a country, can assess whether this is the most sustainable, economic and safest source of energy".

Meanwhile, fashion mogul Westwood, who has previously been outspoken about the shale gas drilling projects in the U.K. and led a group of anti-fracking protesters through the streets of central London earlier this year (Mar14), adds her support for the new website.

A statement from her reads: "MyFrackingQuestions.org is asking the key questions that the public has told us they want answered definitively by the current government. We are acting now to empower the next generation, preventing them from having to deal with the potentially devastating effects of fracking should it go ahead in this country.

"This debate belongs to the British people but, without any solid and reliable information, they cannot take part in this most critical of conversations. Until these questions are answered and until there is open public debate, there can be no social license and no democratic mandate."

MyFrackingQuestions.org is launched in connection with Talk Fracking, a U.K. initiative spearheaded by Westwood, which raises awareness of fracking and government officials' fast-moving plans to introduce it to the country.