Director Wes Anderson Has Added Interior Designer To His Resume After Dreaming Up The Decor For A New Bar In Milan, Italy. 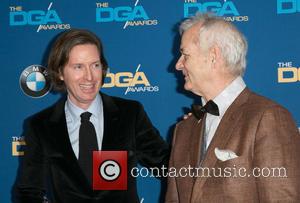 Picture: Wes Anderson and Bill Murray - A variety of stars were photographed as they arrived at the 67th Annual Directors Guild of America Awards which...

Miuccia Prada, head designer for the Prada and Miu Miu brands, commissioned the Grand Budapest Hotel visionary to craft a little magic inside Bar Luce, which is part of the Fondazione Prada in the city.

The filmmaker was given free range on everything from the colours and the furniture to the music that would be available to customers on the venue's jukebox.

Anderson explains he wanted the bar to conjure up Italian pop culture of the 1950s and 1960s, and launching the place's website, he writes, "While I do think it would make a pretty good movie set, I think it would be an even better place to write a movie. I tried to make it a bar I would want to spend my own non-fictional afternoons in."