The cast showed up, looking their sharpest for the UK premiere. 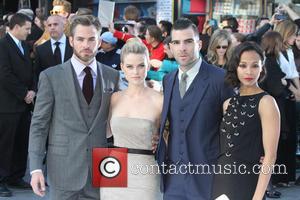 The crew of Enterprise all looked flawless last night on the red carpet of the Star Trek Into Darkness premiere. Zoe Saldana, who reprised her role as Nyota Uhura from J J Abrams’s 2009 film, graced the premiere in a futuristic looking black and white gown. Unfortunately, the breezy fabric meant she had a couple of brushes with a potential wardrobe malfunction, but at least she looked fabulous throughout. Her co-stars, Chris Pine and Zachary Quinto got decked out in classic ensembles in grey and blue. Newcomer to the series Alice Eve, on the other hand, decided to go with a strapless suede Ermano Servino number and she did not go wrong, looking perfectly polished throughout the night. The actress looked radiant as she posed for pictures on the night of the premiere.

Star Trek Into Darkness is the second film in the series, reimagined by JJ Abrams and it is set to hit theatres May 9th. It follows the exploits of Kirk, Spock and the rest of the Enterprise crew, as they on a mission to halt an unstoppable force of terror from within Starfleet- said force is being played by Benedict Cumberbatch in the upcoming film. So while all we have to at this point are photos from the premiere, there is certainly a lot to look forward to in this film. Be excited. Be very excited. And maybe check out the Star Trek Into Darkness trailer below.