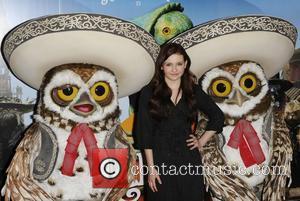 Abigail Breslin has spoken about her experience of working with Johnny Depp on the new animated movie 'Rango'.
Abigail Breslin, the 14-year-old actress who received an Oscar nomination for her performance in 'Little Miss Sunshine', has described her co-star Johnny Depp as "a really nice guy", reports the New York Daily News.Breslin and Depp star in the new children's flick 'Rango', which went straight in at number-one on the US box office. Unlike most animated movies, the voiceovers were recorded together, as if acting out a play. The 14-year-old said, "We were all in the same room and got to play off each other. It lets you react more to what the other actor's doing more naturally than you would if you were just in the sound booth by yourself". When asked what it was like to spend time with 47-year-old Depp, Breslin said, "I thought Johnny was going to be really cool, like, Hey, I'm Johnny Depp type of thing. But he's just a very normal, very nice guy". Abigail gained critical acclaim after making her Broadway debut in 'The Miracle Worker' last year. Speaking about the gruelling schedule, the actress said, "You plan your whole life around it. But it was an amazing experience and I got to play one of my heroes and to do it on Broadway, which is so iconic New York".
Abigail Breslin, who began her career at the age of 5 playing Mel Gibson's daughter in 'Signs', will now begin work on the vampire drama movie 'Innocence' set for release in 2012.