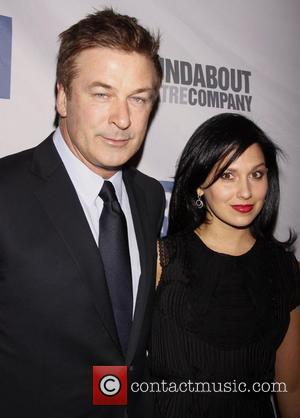 Actor Alec Baldwin has called for a boycott of a leading circus over allegations elephants are ill-treated.
The Hollywood star highlights the animals' plight in a four-minute YouTube.com campaign posted this week (beg12Mar12) by staff at People for the Ethical Treatment of Animals (Peta).
The clip shows footage of a trainer for The Greatest Show on Earth allegedly using a bullhook on a baby elephant, and Baldwin has called for swift action to crack down on the scandal.
He says, "Having worked with actors for many years, it's hard to believe that anyone would have to be dragged kicking and screaming into show business. But for the elephants... that's exactly what happens."
Baldwin is the latest star to call for a boycott of the controversial circus run by the Ringling Bros., following in the footsteps of Olivia Munn, Jada Pinkett Smith and Ashley Judd.
But a spokesman for the under-fire circus group refuted the allegations of mistreatment, telling the New York Daily News, "The health and vitality of our animals is something we can showcase at every Ringling Bros. performance. We invite families everywhere to come and see for themselves how all the animals are thriving at The Greatest Show On Earth."
Ringling Bros' parent company Feld Entertainment agreed to pay a $270,000 (£171,000) penalty last year (11) over claims of animal mistreatment.