Alicia Vikander has revealed she and her 'The Man From U.N.C.L.E' co-stars would rehearse for the film in the director, Guy Ritchie's living room. 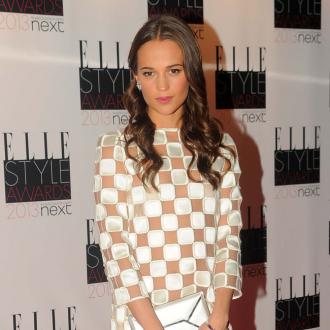 Alicia Vikander rehearsed for 'The Man From U.N.C.L.E' in Guy Ritchie's living room.

The 26-year-old actress has revealed the film's director invited her and other cast members over to his house to read through lines.

She said: ''There was a whisky bottle and a vodka bottle for props, and I ended up rolling around the floor wrestling with Illya Kuryakin.''

The 'Ex Machina' star claimed it was a great way for her to get to know her co-stars, including heartthrobs Henry Cavill and Armie Hammer.

She told the Daily Mail newspaper: ''I was a bit nervous before I started making the film.

Vikander plays Gaby Teller, the daughter of a nuclear scientist who has been abducted by a murky crime syndicate, in Ritchie's retelling of the 60s TV show.

And although her character is, among other things, a car mechanic, the brunette beauty admitted she doesn't even have a driving license.

She confessed: ''I don't have a licence!

''One of the amazing stunt drivers drove the car for me. I was sitting on top of him, pretending to be steering.''

The 'Testament of Youth' actress loved the relaxed attitude on set, and especially enjoyed their daily singalongs.

Alicia added: ''I was looking for Guy after we'd shot a scene. I said, 'Are you watching what we're doing?' And he'd answer, 'Yes - and playing the banjo'.

''After that, every day we'd print out the lyrics to Johnny Cash songs and bring them in for singing, with Guy accompanying us on the banjo. It was exactly what I needed, I think, coming off some quite heavy dramas. It was cool. The music was cool. The clothes were cool.''