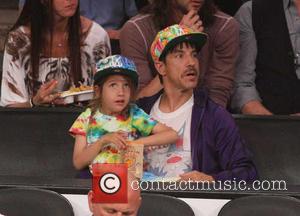 It turns out that following the incident no one is willing to take responsibility for the bodyguard, with the hotel vehemently denying he is one of their staff and the band saying that he isn't part of their usual set-up either. Representatives for the band have since admitted that he might have been hired in the city as additional security, but have only suggested that this might be the case as they continue to deny any responsibility.

As for Kiedis, well he's just fine and actually in good spirits despite the attack. When asked for a statement by TMZ, the singer said "I love the Rolling Stones," and didn't even mention the fight. That's what a lifetime of rock 'n' roll excess will do to you though, all of a sudden nothing seems that interesting compared to what you've done in the past... we assume Kiedis does love the Rolling Stones The singer didin't seem too fased after the attack