Childhood: Anthony Kiedis was born in Grand Rapids, Michigan. His parents are actor John Kiedis, aka Blackie Dammett, and Peggy Noble. They divorced when he was 3. He saw his father in Hollywood for two weeks every summer before moving in with him when he was 12. His dad also sold drugs and the pair used to take marijuana and cocaine together. He attended Fairfax High School in LA and was a social outcast until he met his future bandmate Flea. He later also met his other bandmate Hillel Slovak and the three were best friends, often taking recreational drugs together. He broke his back aged 15 when he leapt from a 5 storey building aiming for the swimming pool below but missed. He still suffers from problems. He was a straight A student at school and graduated with honors before attending the UCLA to study writing. He soon dropped out due to drug addiction.

Musical career: Anthony Kiedis teamed with Slovak, flea and drummer Jack Irons in a band called Tony Flow and the Miraculously Majestic Masters of Mayhem. They played a song called 'Out in L.A.' and were asked by Kiedis' friend Mike Chester to open for his band Mike and Neighbor's Voices at The Rhythm Lounge where they were eventually given a regular spot and changed their name to Red Hot Chili Peppers. They played at various other venues and eventually garnered attention at a strip club show when they played nude but with socks on their penises. After sending in a demo, they were signed to EMI Records to record their self-titled debut album but Slovak and Irons soon left to be replaced by Jack Sherman and Cliff Martinez. After their second album 'Freaky Styley', Irons re-joined the band following Martinez being fired. The third album was a struggle to record due to Kiedis' heroin addiction and lack of motivation. He was temporarily asked to leave to go into rehab and he quit the drug cold turkey after RHCP won the LA Weekly Band of the Year award. His soon started taking drugs again which affected his ability to make complete third album 'The Uplift Mofo Party Plan' with the band. In 1988, Slovak died of a heroin overdose and Irons left the band again unable to cope with the loss while Kiedis quit drugs again. DeWayne McKnight and D.H. Peligro were added to the band, though McKnight clashed with the other members and was soon replaced by a talented fan called John Frusciante. Peligro was then fired and replaced by Chad Smith for the fourth album, 'Mother's Milk', in 1989. They recorded album 'Blood Sugar Sex Magik' in Harry Houdini's old mansion and it hit number 3 in the Billboard charts. Kiedis wrote single 'Under the Bridge' about his addiction and that hit number 2. They embarked on a major tour during which Frusciante felt uncomfortable with the attention and left to be replaced by Arik Marshall. Jane's Addiction guitarist Dave Navarro was added to the band. During recording for the next album, Kiedis struggled with his vocals after becoming addicted to drugs again despite 5 years of being clean. Ahead of the release of their sixth album 'One Hot Minute' in 1995, they recorded a video for 'Warped' which featured Kiedis and Navarro kissing at the end. Warner Bros. wanted to shelve it fearing it would cause offence to their fans but they released it anyway and suffered some backlash. Frusciante was invited to re-join the band and they subsequently released 'Californication' in 1999. As part of their resulting tour, they closed Woodstock '99 which was notoriously remembered for the out of control crowds which resulted in several women getting raped and nearby properties getting looted. In 2007, the band took a hiatus and Frusciante left permanently. The band go back together in 2011 and were inducted into the Rock And Roll Hall Of Fame in 2012. Anthony Kiedis: Other career ventures Anthony Kiedis began his showbiz career as an actor, landing his first role in 1978's, 'F.I.S.T.' opposite Sylvester Stallone and under the stage name Cole Dammett. In the 1991, he appeared opposite Keanu Reeves and Patrick Swayze in 'Point Break'. He has also appeared in 1994's 'The Chase' with Charlie Sheen. In 2004, Kiedis published his autobiography 'Scar Tissue'. In 2008, he organised the festival New American Music Union in Pittsburgh, Pennsylvania. In 2011, he was in the documentary 'Bob and the Monster' about the life of drug counselor 'Bob Forrest'.

Personal life: Anthony Kiedis dated actress Ione Skye for two years but they split in 1989 due to his destructive withdrawal symptoms from drugs. He had a relationship with Heather Christie and they had a son called Everly Bear in 2007. He has suffered from heroin and cocaine addiction on and off since he was 11-years-old. He stayed at the Salvation Army rehabilitation clinic in Grand Rapids after being temporarily fired in 1986 and subsequently spent a period living with his mother. He began taking drugs after 53 days when he met Skye. After Slovak's death, he moved to Mexico and did not attend the funeral hardly able to believe what had happened. He eventually visited his grave and attempted to get clean again. After 5 years of being clean, he underwent a dental procedure and was given the sedative Valium which caused him to become addicted again. Kiedis addiction to heroin and cocaine left him poverty-stricken and close to death and he re-entered rehab in 1998. The band had to postpone a tour in 2012 as Kiedis was suffering from a long-standing injury in his foot that began in 2006. He subsequently had surgery.

Anthony Kiedis Rejects 'groupies' From Coming To His Hotel

The 54-year-old singer and Red Hot Chilli Peppers frontman has admitted he is not into ''the groupie way'' and has giving his security strict instructions not to let any of his fans enter the place he is staying.

Speaking to Musik, he said: ''Groupies, no, they don't get into the hotel. I think the doorman would be fired if he let those people in. 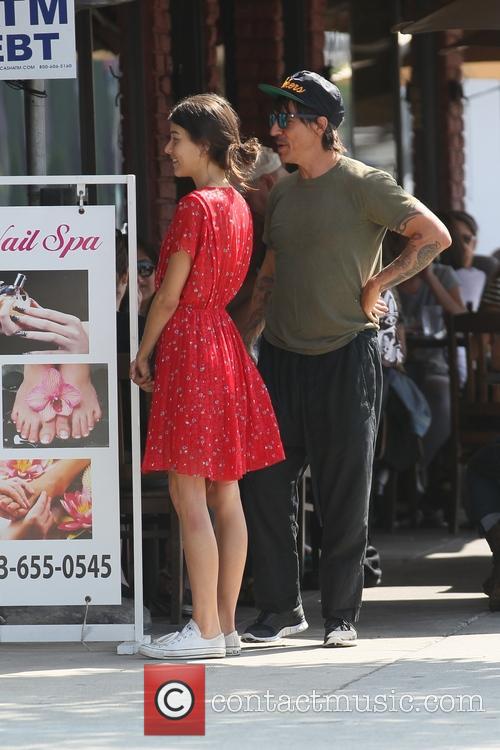 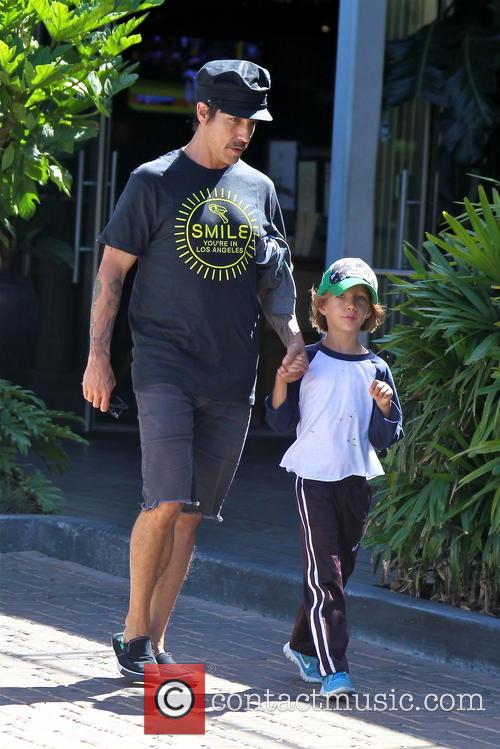 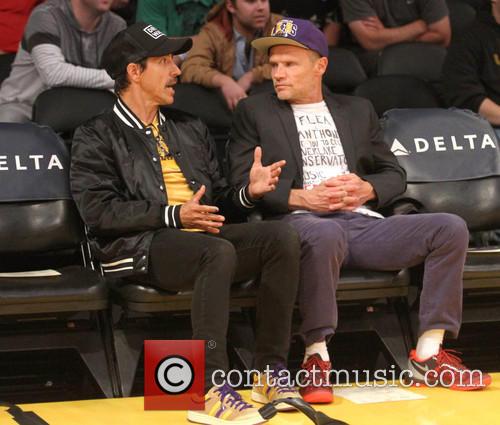 The lead singer of rock band Red Hot Chili Peppers, Anthony Kiedis, hugs and kisses a woman before he leaves Urth Cafe in Los Angeles. As he is snapped by paparazzi, he clips his motorcycle helmet into place and rides away on the vehicle.

He is looking like he feels much better since he had surgery on his damaged foot which forced him to pull out of their US tour in January 2012. And things just keep getting better for Kiedis as the Red Hot Chili Peppers were inducted into the Rock and Roll Hall of Fame back in April this year 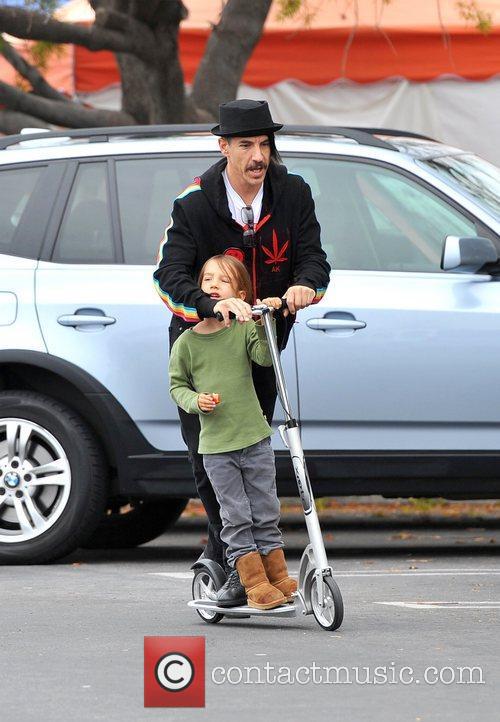 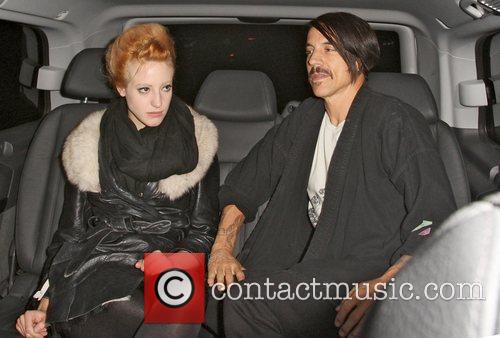