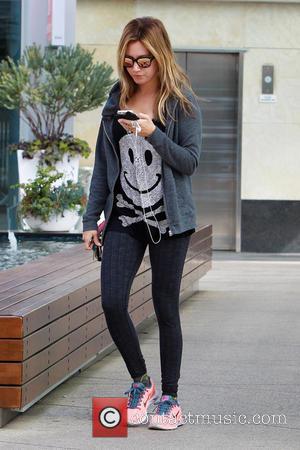 Ashley Tisdale has dedicated her comeback single You're Always Here to her late grandfather, who passed away in September (13).

The former High School Musical star last released music four years ago (09) with her album Guilty Pleasure, and since then, she has focused on her acting career, including starring roles in Scary Movie 5 and Tv series such as Hellcats and cartoon Phineas and Ferb.

But the 28 year old has hit the recording studio once again and released a brand new song, You're Always Here, on Monday (16Dec13), in honour of her late grandfather, Arnold.

The mid-tempo ballad is a track about finding strength in loss, with lyrics that include, "In the darkest night/ I feel you by my side/ What will be will be/ You're always here with me."

Tisdale opened up about her new project with DJ Ryan Seacrest on his radio show on Monday, detailing the process for creating her comeback single.

She explained, "With all the amazing stuff that's happened this year, some moments haven't been so amazing. I lost my grandfather exactly three months ago, and it's always hard to lose someone no matter how old or how young.

"I was inspired to start writing and it was helping me heal and I would go on walks and come home and have written stuff and (fiance) Chris (French), who produces music, sat down and produced and we wrote this song together and that's the song for my grandfather."