Kevin Richardson is planning to return to the Backstreet Boys, having left the group in 2006. 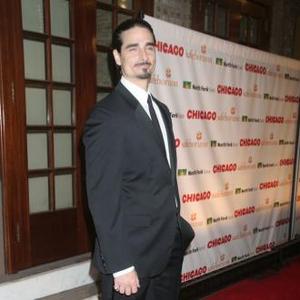 The 40-year-old singer departed the group in 2006, but is now planning to get back with his bandmates Howie Dorough, Aj Mclean, Nick Carter and Brian Littrell to record new music in London this summer.

Nick announced the plans on-stage over the weekend saying: ''We're coming back to London in July for three weeks to record our new album.

''It's been a long time since we've been played on some radio stations and we want all our fans to make pickets and start a protest outside these stations to get them to play our songs.''

Discussing Kevin's return, a source told the Daily Star newspaper: ''Kevin missed the rest of the guys, who he counts as brothers as well as bandmates, and felt now was the right time to return.''

The Backstreet Boys are currently touring with New Kids On The Block as part of supergroup NKOTBSB and Danny Wahlberg recently revealed they were keen to go on another global run of shows in the future.

He said: ''After we finish up the European leg of the tour we head off to Asia and Australia and then we're going to take a much needed break. Backstreet Boys are going back into the studio after July 4 to make a new BSB record. This is a tour that we are all enjoying so much so if at any point down the road an opportunity arises for us to do this again then NKOTBSB will rise to the occasion again. We've all had fun doing this so who knows. This whole concept, it just works so we're there!''