Net worth: Charlie Hunnam has a net worth of $8 million according to Celebrity Net Worth (2014)

Acting career: Charlie Hunnam landed his first role as Jason in 'Byker Grove' after being talent-spotted while buying shoes in a shop. Soon followed was his first big role as Nathan Maloney in Russell T. Davies' 1999 TV series 'Queer as Folk'. His first film was 'Whatever Happened to Harold Smith?' that same year, and he subsequently moved over to LA to further his career. In 2002, he appeared in 'Abandon' alongside Katie Holmes and 'Nicholas Nickleby' with Jim Broadbent, Jamie Bell, Anne Hathaway and Timothy Spall. The following year he took on war drama 'Cold Mountain' with Jude Law and Nicole Kidman. He played football hooligan Pete Dunham in British movie 'Green Street' in 2005, co-starring with Elijah Wood. In 2006, he was in Alfonso Cuarón's 'Children of Men' with Clive Owen, and in 2008 he joined the cast of 'Sons Of Anarchy' as Jax Teller. He also began writing screenplays, including real life story 'Vlad', a story about druglord Edgar Valdez Villareal and a tale about gypsy life. 2011 saw him in 'The Ledge' with Patrick Wilson, and the following year he was the eponymous character in '3,2,1... Frankie Go Boom' alongside Chris O'Dowd. In 2013, he was in Guillermo del Toro's blockbuster 'Pacific Rim'. He was also announced as the leading man in erotic thriller 'Fifty Shades of Grey', but he soon dropped out with rumours suggesting the negative attention he got from it put him off.

Personal life: Charlie Hunnam was raised in Newcastle upon Tyne by scrap metal seller Billy Hunnam and businesswoman Jane Hunnam, before moving to Cumbria after his parents' break-up. He was expelled from Queen Elizabeth Grammar School and continued to complete his exams at home. He later studied film and performing arts at Cumbria College of Art and Design. He married Katharine Towne in Las Vegas in 1999, but divorced three years later. He is currently dating Morgana McNelis (since 2007) with whom he lives outside LA.

By Bang Showbiz in Lifestyle / Showbiz on 14 January 2020

Charlie Hunnam's girlfriend is ''very eager to get married'' after 14 years of romance, but Charlie says he is ''indifferent'' to the idea.

Charlie Hunnam's girlfriend is ''very eager to get married''.

The 39-year-old actor has been romancing Morgana McNelis for around 14 years, and has now admitted that their lasting love means Morgana is ready to tie the knot, although Charlie isn't so sure about the process.

The 48-year-old singer - who is the lead singer in the self-titled band - has a good rapport with the 'King Arthur: Legend of the Sword' actor, and although the 37-year-old actor has admitted he doesn't know ''any'' of the rocker's songs, the artist has played him a track from his LP, which he thinks is ''very very good.''

Speaking about his pal and his compilation, Hunnam told NME magazine: ''I don't know any of his music.

Could Charlie Hunnam go from King Arthur to James Bond as his next professional step up? He certainly seems up for the role as the lothario British spy, though he confesses that he hasn't actually been in talks about the part as of yet. But there's still time.

Following his titular stint in Guy Ritchie's 'King Arthur: Legend of the Sword', Charlie Hunnam is setting his sights on big cinematic franchises. He appeared on 'Late Night with Conan O'Brien' to address rumours that he could be the next 007.

The actor had to turn a previous offer down.

Returning a little later to the small screen than usual this year for its seventh season, fantasy series 'Game Of Thrones' - based on the 'Song of Ice and Fire' novel series by George R R Martin - will bring seven new episodes to fans as showrunners begin to put the wheels in motion for the series' conclusion.

Charlie Hunnam would love to join the fantasy series

With just a single season to go after seven, which will once again be stripped of an episode and brought down to a running total of six, there's around 13 hours of action from the show left to see. Now that the series has outpaced the novel series, much of the material shown on screen is new information, shocking fans of both the books and the series.

There's no denying how amazing Charlie Hunnam looks in 'King Arthur: Legend of the Sword', and from the various teasers we have been treated to ahead of the film's release, we can see that he has also had to display a lot of physical talent for this movie. Thus, you won't be surprised to discover there was a lot of hard work involved.

Charlie Hunnam stars in 'King Arthur: Legend of the Sword'

It always looks like it would be a lot of fun on the set of an action movie, but when you think about how hard actors have to train to get themselves to look a certain way and be able to perform the stunts required of them (professional stuntmen notwithstanding) for the purpose of cinema, your opinion of them becomes considerably higher.

King Arthur: Legend of the Sword - Cast and Director Interviews

For his latest movie, Guy Ritchie, reinterprets the classic story of King Arthur and his legendary rise after retrieving the fames sword from the stone.

Unlike many modern day movies, Richie decided to take an old school approach to developing and shooting scenes for the movie. Very little CGI and green screen was used, the director created huge sets which really captures the feel of the city which is quickly becoming more and more overrun by chaos.

Charlie Hunnam, Jude Law and Djimon Hounsou speak about their new roles in the movie and what it was like to create such an epic tale. John Boorman's 1981 movie Excalibur seemed to not only play a big role in influencing the director but also the actors he cast in the lead roles - that comprehensive version of the tale might've influenced the director but it is isn't the same as Ritchie's take on the story.

'King Arthur' star Charlie Hunnam had a lot of work to do to prepare for his latest role.

It's a very common thing for people to lose their accents through emigration and travelling, but it seems that 'King Arthur' star Charlie Hunnam had to really work hard to get his back after over a decade of living in the United States and adopting an American accent.

Charlie Hunnam stars in 'King Arthur: Legend of the Sword'

The British actor returned to England to play the titular role in Guy Ritchie's 'King Arthur: Legend of the Sword' and that meant getting down with some serious work on his London dialect. Shows like 'Sons of Anarchy' and movies like 'Pacific Rim' have left an American twang to his voice that was difficult to tackle.

The rise of Donald Trump and the Brexit vote plays a part in the new movie.

Based on author David Grann's book of the same name, new movie 'The Lost City Of Z' tells the real-life story of British explorer Percy Fawcett (Charlie Hunnam), his wife Nina (Sienna Miller), son Jack (Tom Holland) and aide-de-camp Corporal Henry Costin (Robert Pattinson). When he makes his journey into the Amazon during the dawn of the 20th century, Fawcett discovers evidence of an as-of-yet unknown advanced civilisation that once existed and could have inhabited the region. Though he had been ridiculed by the scientific establishment who slammed the findings as those of a "savage" tribe, Fawcett continued to return to the Amazon to prove his case, but eventually went missing in 1925. To this date, the explorer has never been found 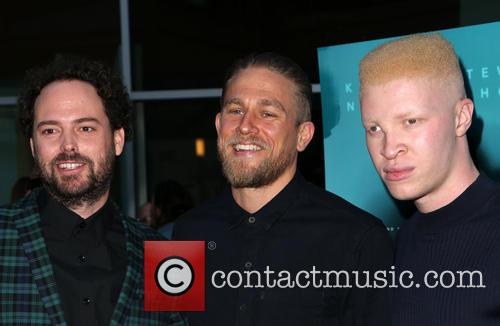 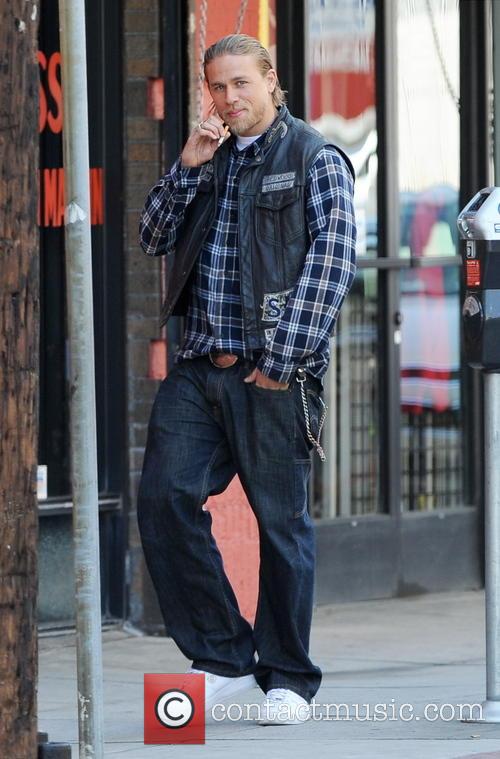 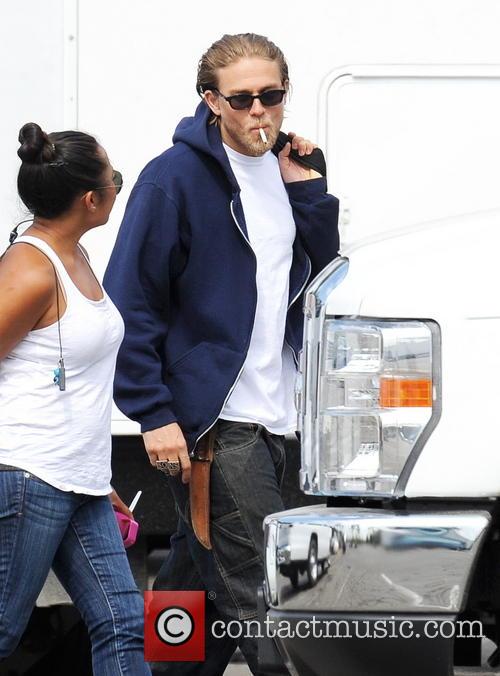 Charlie Hunnam - Charlie Hunnam signed autographs for awaiting fans as he rides off home on his Harley Davidson motorcycle after filming his hit show Son's Of Anarchy in downtown Los Angeles. The british actor was on set with co stars Drea De Matteo and Jimmy Smits who was in a low rider classic car. - Los Angeles, California, United States - Tuesday 17th June 2014 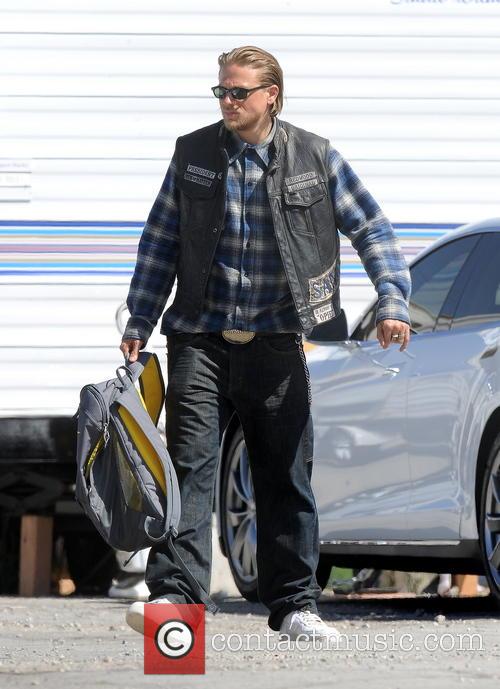