Chris Hemsworth Got Whipped On Thor

Chris Hemsworth injured himself on the set of 'Thor' when he accidently hit himself in the face with a whip. 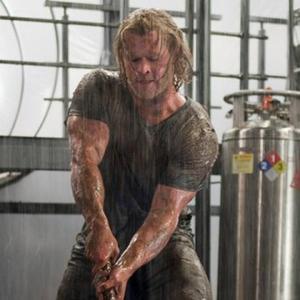 Chris Hemsworth whipped himself in the face on the set of 'Thor'.

The 27-year-old actor - who plays the titular character in the superhero movie - decided he wanted to try out a whip which was being wielded by co-star Tom Hiddleston, who portrays villain Loki, on set.

However, his skills with the weapon weren't good enough and he struck himself across the face leaving him writhing in pain.

Chris said: "I remember one Sunday rehearsal with Tom and his character had a whip and I was like, 'Give me a crack at that.' I was doing my best 'INDIANA JONES' impersonation with The Whip and suddenly I whacked myself right in the eye with it. There was a huge welt across my face and it felt like my eye was hanging out of its socket."

The Australian star panicked about the injury because it occurred just a day before filming on the Marvel project was due to start, but quick-thinking director Kenneth Branagh told him what to do.

He added: "It happened one day before we were due to start filming. I rang Ken and he said, 'Don't tell anyone - just ice it. Fingers crossed.' Luckily, after about five hours of pressing ice on it, the swelling went down ... But I'd come off set with all sorts of bumps and scratches - I didn't even know where half of them were from."

Chris had to bulk up for the role as Thor - who is a Norse God-turned-man by his father Odin, played by Sir Anthony Hopkins in the movie - so he could portray the character convincingly.

He said: "My previous training had all been cardio-based - surfing, swimming and running. I'd never really lifted weights until I got this part, looked at the comic and noticed that Thor was a f***ing huge 600lb guy. It was good old Arnold Schwarzenegger-style body-building and eating tons of protein."