For a lot of kids, the Christmas holidays is their favourite time of year, all the family is together, Christmas day usually brings gifts from Santa and the thought of time off school all amount to smiles in most homes. Max's family is one of those who've got together for the holidays and you'd think that he'd be a happy boy, but when he has a change of heart about the Christmas period, he accidentally evokes the wrath of an ancient force who punishes ungrateful people over the Christmas period - the complete opposite to that of the children loving, gift giving, Saint Nicholas.

Max and his family must team together to find a way to survive the Christmas period without Krampus and his little helpers destroying their entire family.

If a zombie apocalypse is coming your way could a lot worse than having three Scouts on your team. In Scouts Guide to the Zombie Apocalypse three lifelong friends join forces with one badass cocktail waitress to take on the zombies who threaten to ravage their town and turn everyone in the undead. While this trio might be used to fighting for a badge, they're going to have to put all their scouting skills to the test if they're going to save mankind from becoming zombified. In one night these three will learn the meaning of friendship and prove to the world why a scout is your best bet when faced with a zombie apocalypse.

The stars of 'Anchorman 2: The Legend Continues' are seen arriving at the New York premiere held at Beacon Theatre; among them are Kristen Wiig, who plays new addition to the cast Chani, and Christina Applegate, who returns as Veronica and arrives with husband Martyn LeNoble.

By Steven Williams in Lifestyle / Showbiz on 11 December 2013

Steve Carell has revealed during the 'Anchorman 2' première that the filming was difficult, due to Will Ferrell being too funny on the set.

Actor Steve Carell had difficulty working on the 'Anchorman' sequel because he found Will Ferrell so funny it was ''almost impossible'' to work with him. The 51-year-old 'Despicable Me' actor apparently had no quarrels with immediately signing on for 'Anchorman 2: The Legend Continues', as the 2004 original was the "best fun" he's ever had. On the flip side, it made his job incredibly difficult, as he was almost unable to film certain scenes as he struggled to keep his composure.

In an interview with 'Bang Showbiz' at 'Anchorman 2''s premiere at The Odeon, Leicester Square, London, the 'Crazy, Stupid, Love.' star explained that: 'There's a scene we did in a lighthouse with Ron and it's probably the scene I laughed the hardest at. Will was so especially funny that day, it was almost impossible to get it [the scene] done.

Continue reading: Steve Carell Had Difficulty Filming 'Anchorman 2' Because Will Ferrell Was Too Funny For Him

It's almost here. What more can we add?

Anchorman 2: The Legend of Ron Burgundy is almost here and the long-awaited sequel to the oft-quoted movie premiered in Sydney, Australia, to give fans down under a chance to see their fictional newsroom heroes in the flesh before the movie hits cinemas next month. 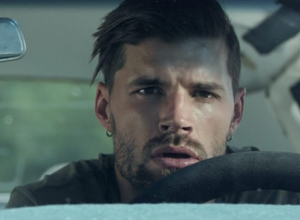 James Stevens has never exactly been on the right side of the law, nor does...