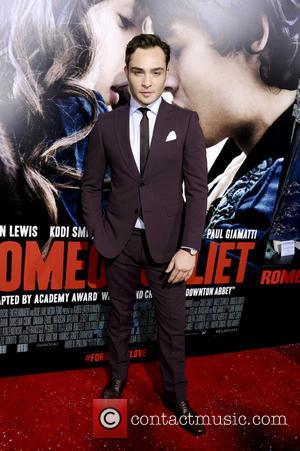 Actor Ed Westwick stunned his Romeo & Juliet co-star Douglas Booth by jumping out of a taxi in Italy and launching into an impromptu rehearsal.

The Gossip Girl star took on the role of antagonist Tybalt, Juliet's cousin, in the latest movie adaptation of William Shakespeare's beloved tragedy, and he headed to Europe to shoot scenes alongside fellow Brit Booth, who plays Romeo.

Inspired by his surroundings after a quiet dinner one evening, Westwick couldn't help but bring their onscreen rivalry to life and unexpectedly began reciting his lines much to Booth's bemusement.

Westwick tells InStyle magazine, "We had been for dinner in this very quiet square in Italy during filming and where we were staying was similar in architecture to were we were going to shoot a scene, so I leapt out of the taxi and started rehearsing. I think Douglas was a bit caught off guard but then we both totally got into it."