Emilia Clarke has been named this year's Sexiest Woman Alive by Esquire magazine and takes the title from last year's winner Penelope Cruz. 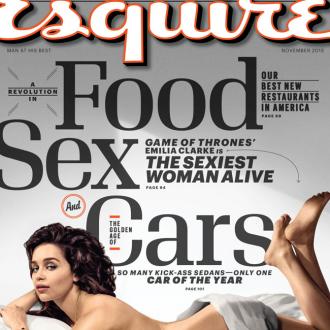 Emilia Clarke has been crowned the Sexiest Woman Alive.

The 'Game of Thrones' star has stripped off and flashed the flesh for a steamy cover shoot with Esquire magazine after the US publication handed her this year's accolade.

Falling onto a bundle of crisp white bed sheets, the brunette beauty can be seen caressing her chocolate locks as she flicks her feet up towards the ceiling and rests her breasts on the mattress, while her bottom is hidden by a sheet.

Wearing nothing but a gold necklace and dainty bracelet, Emilia pulled a sultry pose as she gazed out into the distance with a solid stare and her lips slightly pursed.

Meanwhile, Emilia - who was recently crowned Woman Of The Year by GQ magazine - has admitted she refuses to search herself online out of fear the ''fat'' shaming comments she receives will drive her to an eating disorder.

She recalled last month: ''There were a number of very public discussions about the size of my derrière.

''One article said it was refreshing to have such a 'healthy-sized' bottom on television. You hear that and immediately hear, 'I'm fat.' So I just wanted to save myself from any future eating disorders that may emerge.''