Hilary Duff has praised Haylie Duff for being a ''natural mom'' after she gave birth to her first child, Ryan, last month. 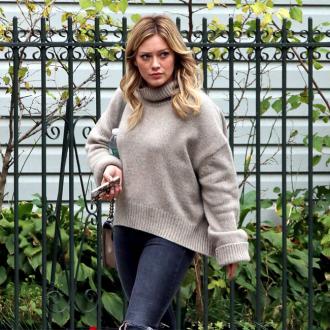 Hilary Duff has praised Haylie Duff for being a ''natural mom''.

The 'Lizzie McGuire' actress' older sister welcomed her first child, Ryan, with her fiancé Matt Rosenberg last month and has now been praised by her sibling for her mothering skills.

She said: ''She's doing great and I'm so proud of her.

Hilary, 27, continued to complement the 'Material Girls' star for her parenting ability by revealing she's regimental with a ''schedule'' of the tot's progress.

She explained: ''She has the baby on a schedule already and she's like four-weeks-old. Little baby Ryan is a cutie.''

However, Hilary - who has three-year-old son Luca from her former marriage to ice hockey player MIKE COMRIE - did admit there is one thing big sister Haylie, 30, is not so good at, as she regularly calls her up to help wrap up the newborn baby.

She told E! News: ''I've been there a lot. I give a mean swaddle so [Haylie's] always calling me like, 'Come over here! Give this baby a swaddle'. It's really fun to have a new addition to the family.''

Haylie published the first pictures of her new arrival in an infant seat earlier this month, saying she feels like a ''lucky mommy''.

She wrote on Instagram: ''Ryan loves to sit in her mamaroo and chill! Lucky mommy! Thanks @4moms_hq #happybaby (sic).''