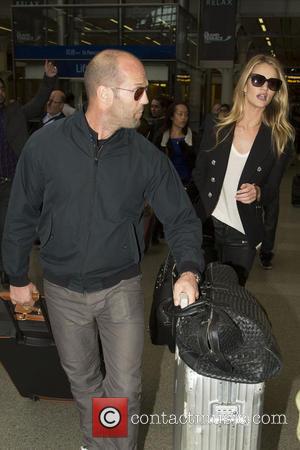 Jason Statham has called on the Academy of Motion Picture Arts and Sciences to finally recognise the work that Hollywood's stunt actors at the Oscars ceremony. The Brit actor, who does most of his own stunts, told Vanity Fair this week that the work of stuntmen and women needs to be recognised, as they so regularly put their lives on the line for the sake of movies.

"All of the stunt men — these are the unsung heroes,” Statham said in his interview with Vanity Fair. “Nobody is giving them any credibility. They’re risking their necks. And then you’ve got poncy actors pretending like they’re doing [the stunts].”

Statham can hardly be cast into this group of "poncy" actors, as he regularly carries out his own stunts in his films. The Homefront actor also began his career as a martial artist and diver, before landing his big film break in Lock, Stock and Two Smoking Barrels and has a good idea of what goes into making a great stunt work. He went on to say that stunt actors are "incredibly talented" and, having worked alongside so many in his time, insisted that their profession is long overdue some recognition.

“For me, it’s a total injustice,” Statham continued. “[Stunt actors are] the ones getting busy. Then you have some guy standing in front of a fucking green screen screwing his face up pretending like he’s doing the stunt. To me, it’s like a farce. I have a real frustration with that because I know these coordinators. I train with them all the time and they are incredibly talented.”

Just last month, when legendary stuntman and director Hal Needham died, there was an outpouring of grief from Hollywood and renewed debate into whether stunt actors deserve more recognition for their work. Needham was never eligible to receive an Oscar nomination, although he did win an honorary statue in 2012. The hard man knows what stunt actors go through