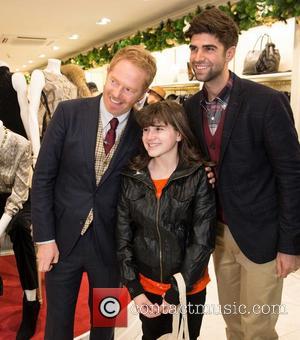 The actor, who married his partner Justin Mikita in 2012, is preparing to head Down Under this year (14) to film a special installment of his popular Tv show, and he has vowed to take the opportunity to help Australians in their fight for gay rights.

Tyler Ferguson's pledge comes after the country's high court recently overturned a law allowing same-sex unions in one region of the Australia, and the actor hopes he and his Tie The Knot foundation can make a difference.

In a post on the charity's website, he writes, "Like many marriage equality advocates we were saddened to hear that Australia's High Court recently overturned the law that legalised same sex marriage in their great country... Newlyweds ourselves, Justin and I kept thinking how devastated we would have been if suddenly we were no longer recognised as a legal couple.

"Tie The Knot has always focused its efforts on marriage equality in the United States, but there is no doubt in my mind that this is a great opportunity to bring attention to the journey toward marriage equality that Australia is currently embarking on. We have great faith in their strength and perseverance... so much so I am personally pledging $10,000 toward the marriage equality efforts in Australia...

"This fight isn't a quick one in the United States, and it won't be in Australia either. But together we can make a difference!"