Jimmy Fallon sings with U2

Jimmy Fallon U2 Bono The Roots

Jimmy Fallon took to the stage to perform with U2 in New York's Madison Square Garden last night (22.07.15). 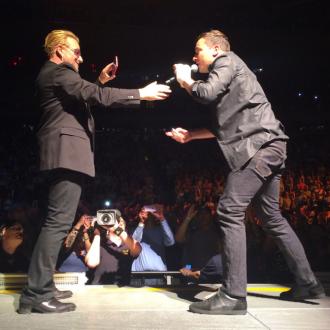 The 42-year-old talk show host - who recently underwent hand surgery after a fall at home - was invited on stage at Madison Square Garden by the Irish rockers, and joined them in a rendition of their hit 'Desire'.

Jimmy - who was in the audience holding a sign which read ''Singer with a broken finger - first poked fun at the group, who were forced to cancel a week-long residency on his talk show last year after Bono was injured in a cycling accident.

He said: ''I'm afraid of Irish men that fall down and injure themselves.''

'The Tonight Show' host then joined the frontman on vocals, earning cheers from the crowd for his impression of the singer, before ending the track with a harmonica solo.

Later in the show, Jimmy's house band, The Roots, also came on stage to perform 'Angel of Harlem' with U2.

In May, U2 disguised themselves as buskers in New York and performed acoustically at Grand Central Station for a segment on 'The Tonight Show'.

Passers-by took to Twitter posting videos of the 'Beautiful Day' hitmakers playing, as shocked New Yorkers were treated to the impromptu set.

One tweet read: ''@jimmyfallon and @U2 dressed as street musicians at a subway station at 10p on a Monday! #gottaloveNYC (sic).''

While another read: ''#U2 at #GrandCentral via @dreyarchives you know. front row at a secret U2 concert in grand central terminal thanks to Jimmy Fallon! #U2 #bono #theedge #jimmyfallon #tonightshow #grandcentral #nyc #livemusic (sic).''