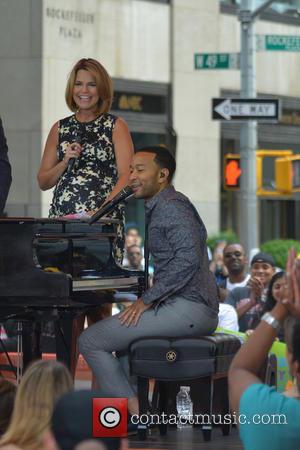 A group of campaigners took to the streets on Wednesday to express their outrage over the death of unarmed teenager Michael Brown, who was shot by a police officer over the weekend (09-10Aug14).

Heavily armed riot police descended on the city centre and used tear gas and rubber bullets to break up the demonstration.

The news has sparked outrage and a number of celebrities took to Twitter.com to voice their disgust.

Legend writes, "The fact that the small town Ferguson police dept (department) has all this equipment should disturb us all. Priorities... Apparently the equipment was brought in from other communities. But still... America is #1 at war and imprisoning. I wish we were #1 at building infrastructure and health care and educating our kids."

Scandal actress Washington adds, "What's happening in #Ferguson is devastating. Wow," and Fall Out Boy rocker Wentz writes, "Photos out of #Ferguson look like more like a war zone."

Ruffalo shared a link to the story and added, "No, it's not Baghdad, it's in America tonight," while dance artist Moby concludes, "Nothing makes me more ashamed of America than the abuse of power. Our country is supposed to be ruled by laws, not the gestapo (Nazi secret police)... dear #Ferguson police, your job is to protect people and respect the law. Or did you all skip police school on the day that was taught?... a reminder: It is 100 per cent Legal to photograph or film the police anywhere in the U.S. it's our first amendment right. #Ferguson #AbuseOfPower."