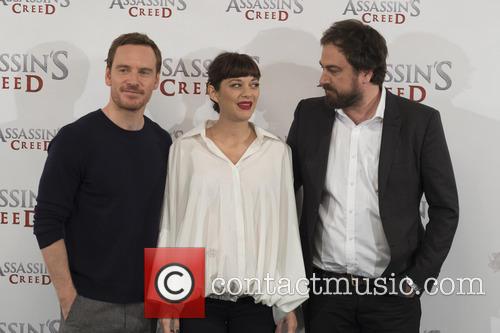 Assassin's Creed sees Michael Fassbender cast as the protagonist Callum Lynch, in this action adventure film that is based on the video game franchise of the same name. Lynch's identity no longer exists and he is forced by revolutionary technology to hear, see and feel the memories of his ancestor Aguilar de Nerha, who was an assassin during the Spanish Inquisition.

Marion Cotillard will be Lady Macbeth in an intriguing new adaptation of Shakespeare's darkest play.

And so it is French actress Marion Cotillard who has been tasked with playing Lady Macbeth in StudioCanal and Film4's forthcoming adaptation of the Shakespeare tale, from the producers of The King's Speech, according to the Hollywood Reporter.

The movie, set to begin shooting in January 2014, will see Michael Fassbender as the iconic anti-hero in Shakespeare's darkest play.

Cotillard replaces Natalie Portman in the movie, which is being directed by Justin Kurzel. Film aficionados will be familiar with the Australian filmmaker for his movie Snowtown, easily one of the darkest, bleakest and most shocking films in recent memory. The film, about John Bunting, Australia's most prolific serial killer, was virtually unwatchable in places, though critics gave it the benefit of the doubt,

Michael Fassbender will star in a forthcoming screen production of Shakespeare’s Macbeth, Screen Daily have reported. The new version of the Shakespearian classic will be produced by SeeSaw, the producers of The King’s Speech and Shame. Justin Kurzel, the director of Snowtown, is also said to be on board to direct the movie, which is expected to begin shooting later this year, with the script being handed by Jacob Koskoff and Todd Louiso.

The script for the new adaptation is described as “one of the most in-demand ahead of the Cannes Film Festival, with a number of sales outfits keen to work on the film.” Film4 are backing the movie, which is a UK-Australian co-production. As or the all-important part of Lady Macbeth, Screen Daily report that the film’s producers are in talks with “at least one Hollywood leading actress.” Fassbender will be reunited with Iain Canning and Emile Sherman, with whom he worked on Hunger, Shame and the forthcoming movie Frank.

According to the report, the new script will take a “visceral approach to the story” and will include “significant battle scenes. Taking on the role of Macbeth can be the making of an actor – though of course Fassbender is already a well-respected actor. Macbeth, of course can also be an actor’s downfall. It will be interesting to see which side of the coin Fassbender fall on.