The popular model is on the rise. 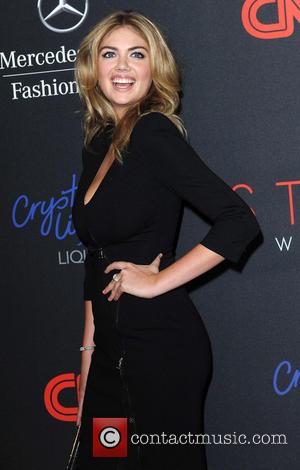 And before the ceremony bestowed her prestigious award upon her, Kate Upton turned up to the Big Apple in ripped jeans – a stripped down look.

It’s been a meteoric rise for the blond model, who, having appeared as a rookie on Sports Illustrated back in 2011, repeated the act again last year – an unprecedented feat. An Italian Vogue cover followed, and the next step: blowing out a candle on the cover of Vanity Fair for its special 100-anniversary issue in full Marylyn Monroe getup.

“I’m not going to name names, but one agency told me, ‘You’re too American, and everybody knows American women are lazy.’ I was so offended! I’ve never been so offended! I was like, ‘You know that you’re in America, right?’ And it wasn’t ‘American models’—it was ‘American women are lazy,’ period! I feel like a lot of women would disagree with that. A lot!” Upton explained to Vanity Fair, opening up about the harsh industry in which she plies her trade.

Despite still exacerbating the issue of females in the spotlight – the covers of magazines bearing all and the like – Upton has been praised for providing a more realistic ideal (not that supplying any sort of ideal isn’t morally bankrupt anyway). Still, her curvey physique is a far cry from the ‘size zero’ models that dominated headlines not two years ago. Kate Upton - model of the year