British Pop Star Kim Wilde Is Putting A Nude Self-portrait Up For Auction To Raise Money For A Breast Cancer Appeal. 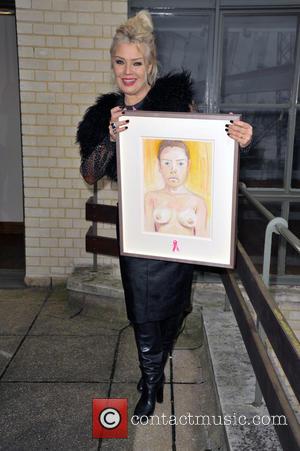 Picture: Kim Wilde - Kim Wilde unveils a self-portrait, painted in 1990, to be auctioned online in aid of the 'Hertfordshire Breast Unit Appeal' at RIBA...

The picture, which the Kids In America singer painted in 1990, will go on sale during a charity event hosted by Kim and her family at Knebworth House in Hertfordshire, England on 28 November (15).

Funds raised from ticket sales for the Wilde Winter Ball and an auction will go towards the purchase of a photodynamic eye scanner, a device which helps surgeons perform breast reconstruction surgery, for the Queen Elizabeth II Hospital in Welwyn Garden City, England.

The star hopes to raise a significant sum for the hospital's specialist breast cancer care unit, where her sister-in-law Mandy was treated after she was diagnosed with the disease.

"I hope that this nude self-portrait will raise a lot of money for this years (sic) Wilde Winter Ball so that the Hertfordshire Breast Cancer Unit can continue to do its incredible and much needed work," Kim writes in a post on her family's charity fundraising website.

In 2013, Kim and her family hosted a similar event to raise funds for the hospital which featured entertainment from fellow 1980s icons Nik Kershaw and Rick Astley.