Kristen Stewart stunned at the world premiere of 'The Twilight Saga: Breaking Dawn - Part 2' in a revealing Zuhair Murad gown as she joined Robert Pattinson on the red carpet. 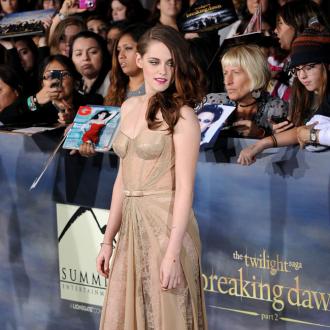 The brunette beauty - who plays Bella Swan in the vampire franchise - wowed on the red carpet on Monday night (12.11.12) in Los Angeles in a sheer corset-style dress by Zuhair Murad which revealed her racy underwear.

Speaking at the event, Kristen enthused: ''I know the most go-to answer for everyone on these carpets is 'Oh my gosh, this is so surreal.' But to be honest with you, this time is so completely surreal. I'm trying to absorb it. I'm trying to be here.''

Kristen, 22, was joined on the red carpet by her real-life boyfriend Robert Pattinson - who plays Bella's vampire husband Edward Cullen - as they reunited in public for the first time as a couple since Kristen's cheating scandal with married director Rupert Sanders this summer.

However, handsome star Robert was more concerned about not getting the chance to enjoy the premiere as they had to jet off to London as soon as it was over to continue promoting the film.

He said: ''Knowing we have to go to London tonight and then to Madrid is so annoying.''