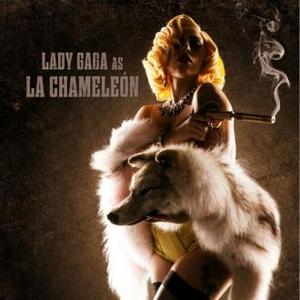 Lady GaGa will make her acting debut in 'Machete Kills'.

The 26-year-old actress took to her twitter account to confirm she has joined the cast of Robert Rodriguez's action movie - a follow up to 2010's 'Machete' - as La Chameleon, and she can't wait to see herself in the motion picture.

She wrote: ''Yes its true, I will be making my debut as an actress ln the amazing MACHETE KILLS BY @RODRIGUEZ IM SO EXCITED!!! AH! Filming was insane. (sic)''

No further details of Gaga's alter-ego have been revealed, but Robert took to his twitter account to unveil the 'Poker Face' hitmaker's character poster, which shows the singer holding a dead white wolf and a smoking gun while dressed in suspenders.

The director admitted Gaga ''kicked so much ass'' while filming her role in 'Machete Kills' and insists he was ''blown away'' by her performance.

In a message accompanying the image, he tweeted: ''I just finished working with @LadyGaga on @MacheteKills , she kicked SO MUCH ASS! Holy Smokes. Blown away! (sic)''

Charlie Sheen will play the US president in the movie and Danny Trejo is to reprise his role as blade-wielding Mexican Federale Machete Cortez.