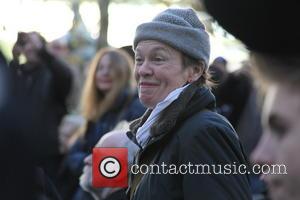 Picture: Laurie Anderson and Wife Lou Reed - A Memorial for The Late Lou Reed is set to take place at the Paul Milstein Pool &...

Lou Reed's widow Laurie Anderson has asked a New York judge to enforce a compensation agreement awarded to the rock legend's estate following the cancellation of the inaugural Ur-1 Festival in 2012.

The Velvet Underground icon was among the acts set to perform at the Miami Beach event in Florida, alongside Kanye West, fun., The Offspring and Keane, and officials at Reed's company, Sister Ray Enterprises, collected a $20,000 (£11,765) advance at the time of the booking.

Lawyers for Sister Ray entered arbitration talks with Go Big Productions promoter Alejandro Olmes in February (14), when Reed's estate was awarded the balance of the star's fee as the musician had been "ready, willing and able to perform" until Go Big bosses scrapped the gig.

However, Anderson, the main beneficiary of Reed's $30 million (£17.65 million) estate, claims the funds have yet to be received and this week (ends08Aug14), she filed suit in Manhattan Supreme Court in a bid to secure payment.