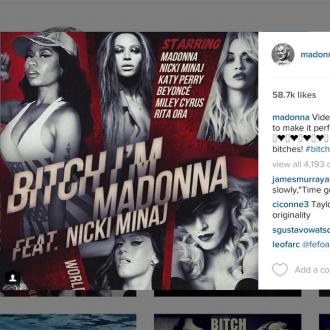 The Queen of Pop has amassed the all-star cast for the promo for her next single 'Bitch I'm Madonna' and teased the hotly anticipated video on her Instagram account by uploading a movie-style poster featuring all the women.

Madonna posted her excited followers: ''Video coming soon! Just tryin to make it perfect for all of you. We are hard werking bitches

Afterwards she posted a black and white photo in which she wears only a bra while smoking cigarette.

She wrote: ''Bitches you have to stop putting cigarettes in my mouth! I don't smoke!! But I might... (sic)''

On Madonna's song only Nicki Minaj will sing on the track and Miley Cyrus - who was missed from the promo shot - will join the other superstar singers.

The promo is set at a mansion house party and features sparkly glitter balls and a huge piece of inflatable pizza.

This will be the latest single taken from Madonna's 'Rebel Heart' album.