A Pink satin dress worn by Marilyn Monroe when she performed 'Diamonds Are a Girl's Best Friend' in 'Gentlemen Prefer Blondes' has sold for more than £200,000 in a Hollywood auction. 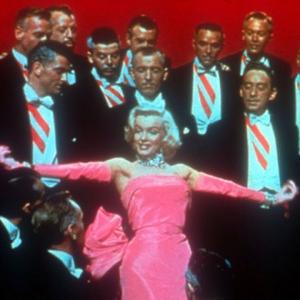 A dress worn by Marilyn Monroe in 'Gentlemen Prefer Blondes' has sold for £213,000 at auction.

The Pink satin gown - which was worn by Marilyn as she performed classic number 'Diamonds Are a Girl's Best Friend' had only been expected to reach £170,000 in the sale, which saw 1,500 items go under the hammer.

The bottomless bag used by Julie Andrews in Disney's 'Mary Poppins' took £65,274, despite an estimated price of just £8,000.

Other items at the Profiles in History Auction - which took place in Los Angeles from June 10 to 12 - included the scissor hands worn by Johnny Depp in 'Edward Scissorhands' and the face of the alien Balok in 'Star Trek: The Original Series', which reached £48,000.

Last year a bra belonging to Marilyn was sold at auction for £3,500.