Glastonbury Festival Organiser Michael Eavis Skipped Kanye West's Controversial Headline Set At The Event On Saturday Night (27jun15) Because He Is "Not A Fan" Of The Rapper's Music. 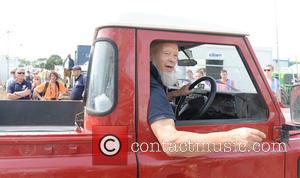 Eavis, who founded the festival in 1972 and now runs it with his daughter Emily, came under fire for booking the hip-hop star for the 2015 event and more than 130,000 angry fans signed a petition demanding West be replaced with a more traditional rock act.

West attracted a large crowd for his Saturday night set, but Eavis has now admitted he decided to skip the show and watch the Moody Blues instead because he is not a fan of the rapper's material.