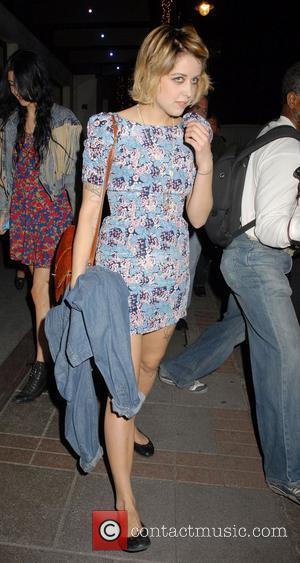 Peaches Geldof has thanker her rocker dad BOB for saving her from her wildchild past - because he was always there to help when she landed in trouble.
Socialite Peaches has been at the centre of a string of scandals, including an accusation of shoplifting and a whirlwind, six-month marriage to rocker Max Drummey.
Now she has let slip a list of further outrages in her past - including running over a pal's cat while illegally riding a quad bike, almost getting thrown out of school, and ending up stranded in northern England after attending a drug-fuelled rave party.
And each time she called on the only person she knew would help - her dad, former Boomtown Rats frontman Bob.
She writes in the London Evening Standard magazine, "The worst thing in the world is losing contact with your family. You never realise how much you depend on them until things get bad. At those moments they're the only people who will definitely help; the last number you want to dial but the only one you know will come.
"'Dad, I know it's 5am but I'm stuck in Middlesbrough in a field and the rave's ended and my mates have gone. Can you come get me?' 'Please speak to the headmistress so I don't get expelled.' 'I need £500 for a plane ticket to Arizona. No, I can't tell you why, I just really need it.' 'I ran over Alice's cat while illegally driving her brother's quad bike. It needs a vet, please help.'
"All of these calls have been made by me and met with shouting but, in the end, help arrived - in my case in the form of a disgruntled Irishman in a crumpled linen suit."