By Andy Peterson in Music Reviews on 22 January 2013

As someone who writes a bit about music, I'm entitled to an opinion about it and you can choose to disagree. I reckon 2012 was a massively underwhelming year for the popular art form, full of releases primed for the download generation, stymied by filler and adopting en masse a risk free, generic, after you policy of being the least worst option. There were exceptions of course, notably from the likes Efterklang, Django Django and Falty DL, but the levels of unwarranted enthusiasm surrounding the release of a new track from David Bowie and the fact that the hottest tickets in town were for the one remaining quarter of Kraftwerk should tell you all you need to know about the lack of a sustainable talent pool. 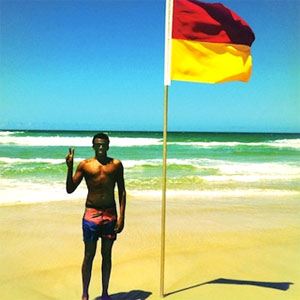 Of course, new bands will emerge in 2013, new bands always do. If there's any justice (a cliché I've always promised myself I'd never put in ANY review I ever wrote) Sinkane should be one of them,  not because they have the skinniest jeans and all the right remix credits, but because they're actually really good. Normally when a critic says that it means they satisfy the hack's need for hipness by association, but although Mars will probably get very good reviews in all the right places, they win because they're diffidently making something that satisfies body and soul, a rare quality amongst the previously mentioned homogeneous mass of banjo/synth toss.

Well, I say Sinkane are a band, but that's only true when on the road. At home they're just Ahmed Gallab, who created most of this second album himself, reportedly playing at least four instruments on each track. The son of two exiled Sudanese parents who moved to the US in 1989, he lived an itinerant existence as a youth, eventually washing up in Ohio, where he became the only skate punk loving Muslim in his school year. All this was the unlikely basis for a post college career which has consisted of building the Sinkane project whilst playing with the likes of Caribou, of Montreal and Yeaysayer (some of which guest here). Which brings us up to date, more or less.