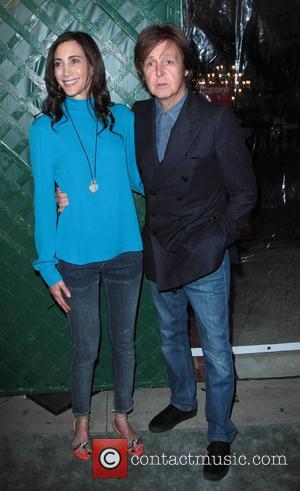 Last night (April 26, 2012), Sir Paul McCartney made a surprise cameo on the second ever live episode of 30 Rock. The former Beatle's appearance on the show wasn't just a shock for the audience, though; it ended up being quite a shock to one of the show's stars, too. MCCartney's starring moment began with an introduction from Kenneth (played by Jack McBrayer), who proceeded to escort Sir Paul to Jack Donaghy's private bathroom (Donaghy is played by Alec Alec Baldwin). MCCartney reportedly waved to the show's audience, "before slapping a star-struck Donaghy across the face to bring him back down to earth," according to Spinner.com.
Baldwin clearly enjoyed the moment, despite the sting he received on the face and later posted a message on Twitter, saying "To be slapped on live TV by Sir Paul . File that in my diary under perfect." MACca appeared in another scene a little later on, as well, in which he confessed that he'd experienced memory loss after he had slipped in the bathroom and hit himself on the head. This then led to Liz Lemon (played by Tina Fey) trying to convince him that he was, in fact, her boyfriend.
The show was also filmed separately for a West Coast broadcast, though MCCartney did not appear on that one. He was replaced instead by Kim Kardashian. Baldwin didn't find the time to tweet about Kim but did post a message of thanks to the 30 Rock crew that said "My humble sincere thanks 2 the cast n crew of 30 Rock as we wrap Season 6 live on NBC. Tina, Robert, every1 at the show, congratulations."