The 34 year-old rap star is ordered to stay at least 100 yards from his ex-fiancé after allegedly breaking her nose. 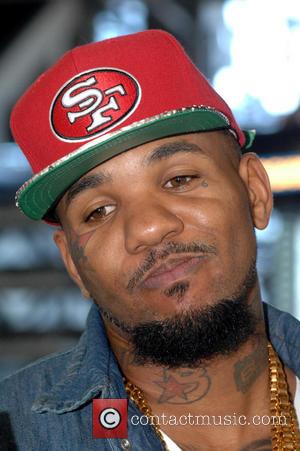 Rap star The Game has slapped with a restraining order against his former fiancé Tiffney Cambridge after an alleged attack that occurred last month (March).

Cambridge filed the order, which states The Game has to stay at least 100 yards away from her at all times, after she suffered a broken nose and was badly beaten by the rap star on March 16th, TMZ reports.

The order is scheduled to be in place until their court hearing next month, but due to the pair sharing two children together, The Game will be able to see them on weekends.

According to the gossip site, this attack allegedly left a table broken which injured both their children, and when Tiffney went to see to their daughter, who was crying due to a bleeding cut on her leg, the rapper became more violent.

The legal documents state that when this happened the 34 year-old, real name Jayceon Terrell Taylor, reportedly shouted "Move the f*** out the way" and called her a bitch while striking her in the stomach with his first, and she also claims he said "I will end it all."

At first the 'My Life' rapper refused to let Tiffney leave and apparently told his young children if their mother rang the police both her and their father would go to jail.

MORE: The Game's European Tour In Jeopardy Over Visa Issues

Once Tiffney did leave the house she went to the hospital and a doctor informed her that her nose was broken.

However, The Game has denied ever attacking Tiffney and claims that she is completely lying.

"I don't want to give fuel to these false accusations, but the truth will definitely come out," he told the gossip site. "I am always looking out for my children's safety and have never laid a hand on Tiffney."