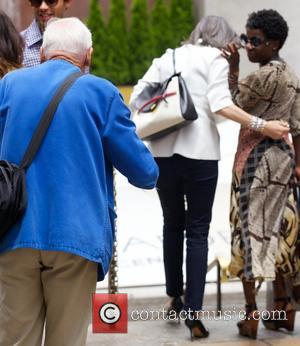 Another Hollywood movie has been recreated on Broadway as a musical, producing widely disparate reviews from critics. Charles Isherwood of The New York Times calls the music that was added to the movie's plot "rudimentary" and "bland." He does have a few words of praise for the "nifty special effects" but remarks, "These high-tech flourishes lend the show the feel of one of those sensory-bath, movie-inspired rides at the Universal Studios and Disney theme parks. But the thrill is fairly minimal, since the seats in the Lunt-Fontanne can't make like a roller coaster and jolt us around, addling our brains to the point of forgetting the plodding apparatus of the story." Moreover, at the premiere, a malfunctioning effect forced a 20-minute delay of the performance. A disaster, suggests Joe Dziemianowicz in the New York Daily News , who writes, "Without eye-popping tricks, the show offers zip in the way of wonder." Indeed, Elisabeth Vincentelli in the New York Post , who also calls some of the effects "nifty," has no use for anything else about the musical. "This distended, hyperactive tornado of a Broadway extravaganza picks up characters, objects and plot lines and flings them about willy-nilly, leaving the audience dazed and confused," she writes. On the other hand, Mark Kennedy of the Associated Press regards some of the scenes as "eye-poppingly brilliant," and concludes, "Overall, it's an ambitious, carefully orchestrated work that raises the bar on technological innovation." Out-of-town critics also heap praise on the show. Howard Shapiro in the Philadelphia Inquirer calls it "an astounding marriage of live theater and high-tech." And while David Rooney of the Hollywood Reporter calls the musical "soulless," he Nevertheless adds, "The show's saving grace is its dazzling technology."